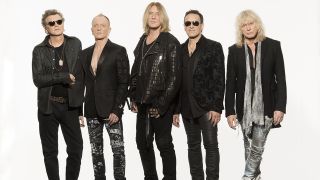 With music biopics all the rage at the moment thanks to Queen's Bohemian Rhapsody, Motley Crue's The Dirt and upcoming Elton John film Rocketman, could Def Leppard be next?

Rolling Stone caught up with the band ahead of their induction into the Rock And Roll Hall Of Fame and asked if the 2001 VH1 movie Hysteria: The Def Leppard Story would be the final word as far as a film about them went.

He said: “We were subjects of a VH1 movie 20 years ago that was the biggest pile of shit ever made. I doubt very much anybody would be really interesting in making another one.”

But Def Leppard fans shouldn’t be too despondent, as the vocalist added: “We’ll see. We’re open to anything. Somebody comes along because, 'We want to make a movie about you guys,' why not?”

Def Leppard were inducted into the Rock And Roll Hall Of Fame by Queen’s Brian May on Friday evening, with the band then launching into Hysteria, Rock Of Ages, Photograph and Pour Some Sugar On Me.

They then returned to the stage at the end of the ceremony to lead an all-star jam through Mott The Hoople’s All The Young Dudes with Ian Hunter.