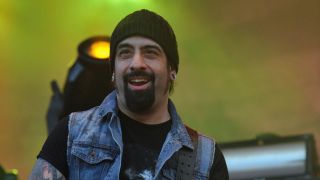 Volbeat’s Rob Caggiano recalls an amusing tour bus incident which saw a half-naked Lemmy screaming at him for supposedly stealing his last beer.

The former Anthrax guitarist says the showdown happened on a European tour with Motorhead and that he’ll never forget being told off by Lemmy, who was wearing nothing but his underpants.

Caggiano tells Revolver (via Blabbermouth): “Phil Campbell invited me on their tour bus to hang out. I was with Phil and Mikkey Dee in the upstairs lounge, while Lemmy commandeered the downstairs with his old war movies.

“We were really having a killer time up there drinking booze, listening to music loud as fuck and trading stories. This went on until about 5am. The three of us were absolutely shitfaced drunk and it was time to get some sleep.

“The next thing I remember is somebody poking my leg violently over and over again. I finally managed to pry one eye open and what do I see in front of me? Lemmy, wearing nothing but his white stretched-out underwear. He’s standing there screaming at me in that unmistakable gravelly voice, ‘Did you fucking drink my last beer?!’

“I sat up straight and said, ‘Lem, I swear I didn’t touch your beer. We were up here the whole time.’ He looked at me in silence for a full minute until he finally said, ‘You better not have.’ Then he turned around, slammed the door and went back downstairs.”

Lemmy last year told TeamRock that Motorhead are going from “strength to strength” after his health problems which saw him go under the surgeon’s knife a number of times.