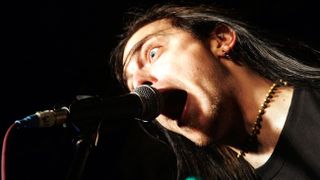 Bullet For My Valentine frontman Matt Tuck has recalled passing out in the vocal booth when recording the band’s debut album The Poison.

Tuck says the Welsh metal outfit were under pressure when recording The Poison with producer Colin Richardson at Chapel Studios in England and the singer says spending hour upon hour int he vocal booth took its toll.

Tuck tells Metal Hammer: “We were taking on a lot at the time. Singing in a booth for four hours sounds easy, but it’s really fucking hard. Some of the vocal parts were so angry and pissed off and excited that I pushed like crazy to get this aggressive performance out.

“There were some spinny, pass-out moments. And I felt rotten, and had panic attacks. When we recorded the intro scream on Tears Don’t Fall, I did actually pass out. On the take, you can hear a scream, and then this dropping body.”

Producer Richardson adds: “It was the famous, ‘Let’s Go!’ at the beginning. We went into the studio, and he was laying on the floor passed out. We shook him a little, and he went, ‘I feel terrible, I think I’m gonna be sick.’ So that was one hell of a scream!”

A trip to the hospital helped, but Tuck became anxious that there would be a repeat of the fainting incident.

He says: “It was more psychological than physical – you get a bit scared, and then you get back in the booth and think, ‘Oh, it’s going to happen again.’ It starts to fuck with you a bit. When I was worrying, I was increasing my heart rate, which was making me panic more. I needed to man up.

“I’d never been in a situation in life to have anxiety. It was just getting all this done. You start to get these pressures – starting to get into the public eye, and the metal world. There was anticipation for the record, and I wanted it to be the best.”

The full interview with Bullet For My Valentine can by read in the new issue of Metal Hammer magazine, which is out now in print and via TeamRock+.

The band will play The Poison in full on some of their upcoming UK tour dates.

Bullet For My Valentine tour dates

Revisiting The Poison, the album that made Bullet For My Valentine superstars