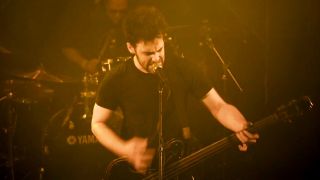 Black Rebel Motorcycle Club frontman Robert Levon Been leads his late father’s band The Call through their classic track I Still Believe in a clip from their upcoming DVD.

Michael Been fronted The Call for seven albums in the 1980 and 90s, as they impressed musicians including Peter Gabriel and Bono during their career. He then became BRMC’s sound tech until his sudden death on tour with them in 2010.

The idea of a reunion with Been Jr at the fore came after guitarist Tom Ferrier saw the younger man performing at his dad’s memorial event. He says: “Watching Robert reminded me of the power of his lyrics, and I was impressed with the way Robert sang them.”

The result was the tribute show, to be released a The Call Live Tribute With Robert Levon Been on September 2 via Label Recordings.

Robert says: “It’s difficult to sum up what this show meant to me. The very first time we played in rehearsal together there was such an overwhelming love for the songs and the spirit that it couldn’t just end there. We had to take it as far as we could go, to create an echo that would carry us all.”

The pack can be pre-ordered on Amazon and iTunes, and a vinyl edition is also available.