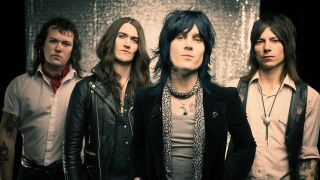 Atlanta rockers Biters have announced that they're going on 'indefinite hiatus'. The band, whose most recent album The Future Ain't What It Used To Be was released last year, made the announcement on Facebook.

The statement reads: "With heavy hearts we have decided to put Biters on indefinite hiatus.

"We are beyond grateful to each and every one of you. You have been the greatest fans in the world. Thank you for every show, every t-shirt, every snack, every place to crash, every record and CD, every listen and every download.

"Thank you for letting us be a part of your life and being a part of ours, and we hope you will keep up with the other things we get up to.

In a separate statement, Biters' frontman Tuk Smith said,"For more than a year now, Biters have been limited in their options to move forward in this ever changing music business.

"The ongoing struggle has left the band logistically crippled & frustrated. Ultimately I have come to the conclusion that we all deserve the freedom to explore other options at this time in our individual lives.

"In the past year I have spent seemingly endless hours writing and working on songs in solitude.

"A solo record feels like the next step I should be taking from here.

"I hope all of the friends I’ve made along this crazy journey will continue on with me as I go down this new road. "

In 2015, Smith told Classic Rock, "The life we write about is real. It’s pretty rough in some places down here. I want to show that rock’n’roll is still cool, a little bit dangerous and so much fun – it’s not ancient and archaic music for old people. Rock isn’t dead… it’s in a coma right now and we’re trying to wake it up!"

Biters' last show was at the White Oak Music Hall in Houston, Texas, in July, while their last UK show was at London's Underworld in December 2017.