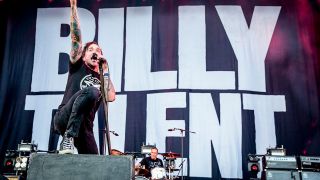 "We are huge Billy Talent fans and between us we have seen them countless times live," Yorkshire-based "aggressive pop" purveyors As Sirens Fall told Louder when we tasked them with selecting for us the finest moments from the Canadian alt.rockers' career. Just a brief listen to ASF's punchy emo-pop should indicate to you the influence Billy Talent's slick songwriting and ear for an infectious melody have had over the five-piece's output thus far, so we reckoned they were expertly placed to produce such a list for us.

"When Louder asked us to put a list of our favourite 10 songs together, it was so hard that we decided the fairest way was to pick two each," they tell us. So, without further ado: the best Billy Talent songs, democratically chosen by each member of As Sirens Fall.

Mikey (vocals/keys): "It’s really easy to forget how hard high school was for a lot of people, including me. At that age, everything felt like it would last forever. This song reminds me of that in both the best and worst possible ways. I love it."

Jason (bass): "Sometimes in life you need to know that other people have experienced what you are feeling and you’re not on your own. This song conveys the feelings of grief effortlessly, and I’d encourage anyone going through grief to give it a listen. The melodies are beautiful and the words cut straight to the point. Beautiful, brilliant song."

Jarlath (drums): "Also being a fan of Paulo Coelho, I love the nod towards his works. Mix that with those crazy stops and chord progression – what a recipe!"

Adam (guitar): "They opened with this track when I first saw them back in 2007, and they extended the intro and I loved it. It's still a standout song for me."

Richard (guitar): "This is just a fantastically written song. From the perfectly executed vocal harmonies building through the verses, to the massive main guitar hook that repeats throughout. Combine those facets with a politically charged lyrical content, and a musical dynamic that ebbs and flows throughout the varying sections of the song and you have the makings of a true anthem."

Mikey: "When it comes to Billy Talent, it just has to be done. An absolute anthem for thinking for yourself. Motivation, forward thinking and energy for change."

Jason: "My favourite live Billy Talent Song, after watching their set I can never get it out of my head. The lift in the chorus given by the change of pace and the space the guitars give the vocal really makes this song for me. An anthem that stands for the acceptance and equality that the rock scene is so known for, this song is lyrically very important too. A big ‘Fuck you’ to any bullies out there."

Jarlath: "The riff man... THE RIFF! It’s impossible not to move in some way to this song – it’s heavy, funky-fresh and angry. Oh so angry."

Adam: "This song's probably from my favourite album by Billy Talent. I really like how the song cuts to just guitar and vocals on the build up to the chorus, and how it creates tension. Then when the double vocals over the top of each other kick in throughout the chorus – it's awesome."

Richard: "I actually struggled to choose a second song. It was so close between this, Fallen Leaves and Worker Bees all for the same reason: the guitar work. It's no secret that Billy Talent are favoured by guitarists for their dynamic and interesting stringmanship. Ian D'sa is able to switch seamlessly between intricate clean licks and crushing distorted riff work. It's the opening riff in Don't Count On The Wicked that tops the pile for me. The fluid combination of natural harmonics and massive chords, topped off with some of my favourite vocal harmonies throughout the song, make for sublime listening."

As Sirens Fall's new EP, Where Lost Things Go, will be released April 13. Check out the video for single Lily below: