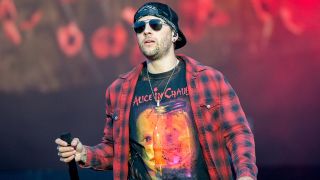 Avenged Sevenfold frontman M Shadows has written an open editorial for Revolver on why he’s standing with the Black Lives Matter movement.

In the piece, Shadows calls on the rock and metal community to reach out and show compassion to “help raise up our fellow humans.”

Shadows says: “If you are white and have been sitting on the sidelines of this situation, we need you to stand up. Taking a stand for our fellow Americans does not mean you condone the riots. It simply means you are listening and want to help.

“If you posted in opposition of the riots yet were previously silent on the deaths of Ahmaud Arbery, George Floyd and Breonna Taylor, among too many others, please ask yourself why. It's time to show our fellow Americans that we hear them and feel their pain.

“If someone says, 'Black Lives Matter' and your response is, ‘All Lives Matter,’ then maybe take a look at the core of that reaction. Every life is valuable – that is a given – but right now the lives of the oppressed require our undivided attention."

He adds: “Yes, the police have an incredibly daunting job, and many uphold the integrity of their position, but if that is your point of contention, I say again: The lives of the oppressed require our undivided attention right now.”

Shadows says he understands that the Avenged Sevenfold fanbase is “made up of very few black Americans,” but goes on to say: “That is why I feel more compelled than ever to write this,” adding: “Standing against inequality and systemic racism is the very least we can all do.”

Earlier this week, Bandcamp revealed that on June 17, they’ll donate 100% of their share of sales to the NAACP Legal Defence Fund to help in the fight for “racial justice, equality and change.”