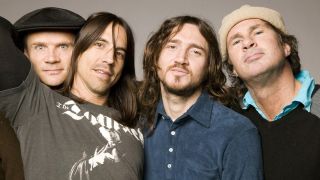 Red Hot Chili Peppers’ Anthony Kiedis says his former bandmate John Frusciante was one of the easiest people to make music with.

Frusciante joined the band in 1988 and appeared on albums Mother’s Milk and Blood Sugar Sex Magik before he left in 1992. He returned in 1999 before the release of Californication and remained in the band until his departure in 2009. He’s now producing his own projects – and released a digital archive of music he produced last year.

Kiedis admits he misses the guitarist and describes him as a “very special person.”

The singer tells La Voila: “My experience with John was one of the most wonderful and easiest people to make music with. We could sit down on the floor, John and I, and I could take out a piece of paper, and I would say, ‘Okay, I wrote these words.’

He adds: “Never did I meet someone who was so easy to write songs with, and really good songs. If I call him up and say, ‘I’m very sad today,’ he would be like, ‘Come over right now – we’re writing a song.’

“So I bring my sadness to John and he’s like, ‘Sit down, get the notebook, start writing your feelings.’”

Kiedis adds: “I miss him, but I also accept the separate lives – but I miss him.”

Drugs, ghosts and the remarkable re-birth of John Frusciante