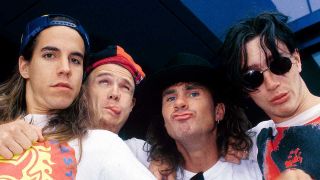 The state of California is the most fertile ground for rocking though. It’s been both the spiritual and literal home of rock ‘n’ roll in its various guises for over half a century now, and it’s impossible to talk about so many of the most iconic rock acts throughout the ages – The Doors, The Eagles, The Runaways, Black Flag, Guns N’ Roses, Jane’s Addiction, Rage Against The Machine – without also talking about the Golden State.

No band is more tantamount to California than the Red Hot Chili Peppers. You thought the likes of the Beach Boys and Mötley Crüe were mad about Cali? Well, they were, but they only referenced the region specifically in a few of their songs.

The Chilis – whose frontman Anthony Kiedis was actually born in Michigan and bassist Michael ‘Flea’ Balzary hails from Melbourne – on the other hand, pay tribute to the west coast pretty much every chance they get. It forms a key component in their psychological makeup and musical DNA, and the band basically wouldn’t exist without it – at least not in the way the world has come to know them.

Here’s the best 13 songs in which the band reference the state, Los Angeles or Hollywood – and there’s a fair few…

Taken from the band’s eponymous debut album, Out In LA dates back to their first-ever gig which took place at the Rhythm Lounge in Long Beach, California in 1983 – back when they were called Tony Flow and the Majestic Masters of Mayhem. They improvised and jammed whilst Michigan-born Kiedis rapped a poem that he’d written about living in LA, and their whole sound took off from there.

It was actually only supposed to be a one-off gig but the 30 or so people in attendance seemed to take to their funk-rock hybrid, so they ditched the joke monicker and the Red Hot Chili Peppers were born.

This song also featured on the band’s self-titled debut. It was the first music video the band released, and some moderate rotation on MTV helped build their growing fan base.

It fashions their enduring blueprint, with groove-laden basslines, the rap-driven vocals, the psychedelic textures and colours, the overt sexuality and desert-inspired spirituality… it’s all there. And of course there are plenty of references to Hollywood in the lyrics, thus creating the template for everything that followed.

This was the band’s second single from Freaky Styley, produced by Parliament/Funkadelic legend George Clinton. Flea had been listening to a lot of Louisiana funk group The Meters and wanted to cover one of their songs for their second album.

Clinton suggested that they took the opportunity to dedicate a song to Hollywood – thanks for that, George – and rewrite the lyrics to Africa, a song from the band’s 1974 album, Rejuvenation.

Many of the lyrics on their 1987 album revolved around Kiedis’ addiction to heroin. Apparently, his dependencies on the substance grew so bad over the recording process for this record that he would turn up for rehearsals “literally asleep”, and Flea kicked him out of the band with no intention of letting him back in until he had undergone drug rehabilitation and proven that he was sober.

It was only when the band won the LA Weekly Band of the Year Award that the singer was inspired to check into rehab and get himself clean. It was on the plane ride home from a Michigan rehab facility that Kiedis, inspired by a “whole new wave of enthusiasm” due to his sobriety, wrote the lyrics to this song. Fight Like A Brave was his attempt to inspire other people to kick the habit.

Flea has described the band’s 1987 album as their most “rockingest record”, and Organic Anti-Beat Box Band closes the album in raucous style. It’s another “Hollywood jam”, and you can hear the excitement of these four old friends – Kiedis, Flea, Hillel Slovak and Jack Irons – getting into the studio together and developing their sound.

However, this would sadly be the last recording from the original foursome, as Slovak passed away of a heroin overdose soon after the album was released. He was just 26 years old.

Following the tour to promote The Uplift Mofo Party Plan, guitarist Hillel Slovak died of a heroin overdose, after which drummer Jack Irons – unable to cope with his friend’s death – also decided to quit the band. Reduced to a duo, Kiedis and Flea contemplated calling it a day before ultimately deciding that they owed it to their recently deceased friend to continue his legacy.

They enlisted new players John Frusciante (guitar) and Chad Smith (drums), and the now-classic RHCP line-up was in place. Magic Johnson is from Mother’s Milk, the first record with the all-new line-up, and is about basketball legend Earvin ‘Magic’ Johnson. He spent 13 seasons with the LA Lakers, so unsurprisingly the song references their Californian hometown several times. Both Kiedis and Flea can be regularly spotted courtside at the Staples Center, and let us tell you, those tickets ain’t cheap by any stretch.

Anthony Kiedis wrote this song about the times he’d spent doing drugs in downtown Los Angeles. Initially, he was reluctant to bring it to his band mates as he thought it might be a little too emotional and out of sync with the rest of their material. Thankfully, producer Rick Rubin convinced him otherwise.

The band – after hearing the lyrics and finding them to be hauntingly beautiful – wasted no time piecing together a suitably powerful and affecting arrangement, and one of the all-time great alternative rock songs was born.

Flea credits the music video, directed by acclaimed filmmaker Gus Van Sant, as “the thing that really made [them] break through the mainstream of American and worldwide pop culture”. The global success of the song also led in part to the departure of John Frusciante who wanted the band to remain underground. There’d be no going back after this though.

The opening track from the band’s seventh studio album Californication was inspired by Roberto Benigni’s Oscar winning film Life Is Beautiful – hence the reference to the title in the song. In the lyrics, Kiedis describes his travels and adventures around the world, referencing everywhere from Bombay to Sicily and yes, you guessed it, California.

It seems like no matter how far the band travel, all roads lead back to the Golden State. This track in particular sets the thematic tone for the whole record, whilst the fired-up bass line and booming drum beat recall the band’s early, funk-fuelled days of debauchery but with an added layer of maturity and spirituality under the surface.

Many people have credited the success of Californication to John Frusciante’s return to the fold, but a significant portion of the praise should also go to Anthony Kiedis. Once the singer cleaned up, he discovered new found levels of soul, pitch, range and emotion in his voice.

Frusciante’s presence obviously exerted a significant – and positive – influence on the band’s new material, and his guitar work on Parallel Universe – from the disco intro through to the Jimi Hendrix-esque outro – is exceptional.

But the drastic improvement in Kiedis’ vocals allowed the band to integrate more of the melodies, harmonies and complex song structures that the previous RHCP albums had hinted at. It was the turn of the millennium and after 15 years of fronting the band, Kiedis finally felt like a “California King”, which is probably why he felt the need to shout about it in this song.

The title track from their 1999 full-length release is an exposé and critique of Californian culture and the phoniness that’s associated with Hollywood. It seeks to uncover the dark side of Tinseltown, and through it’s various movie references to space-age blockbusters like Star Trek and Star Wars, addresses the ways in which America forcibly exports its ideologies to the rest of the world through its movie industry.

Which is kind of ironic, seeing as how the band has appeared in assorted movies over the years, both as themselves (Thrashin’ (1986) and Tough Guys (1986)), and as actors playing roles (Kiedis was in Point Break (1991) and Flea has starred in dozens of films, including The Big Lewbowski (1998) and _Fear and Loathing in Las Vegas _(1998). But maybe that just makes them experts on this subject?

On Californication, almost every single song is about The Golden State in one way, shape or form. But this song seems to be a little further from home. Why does Kiedis keep mentioning “London in the summer time”? And just who is the “English girl” and “American man” in this song?

Well, Emit Remus is summertime spelt backwards, and according to former Spice Girl Melanie C, it’s about a summer fling she and Kiedis shared back in the ‘90s. She told the Daily Express in 2010 that the song was the most romantic thing anyone had ever done for her.

The lead track from their ninth studio album became their fastest selling single ever. The song is about a young Southern girl who moves to California only to have her dreams crushed by the cruel realities of life.

According to singer Anthony Kiedis, the character Dani is an amalgamation of the various women he’s known in his life. The more discerning Chili Peppers fans will have heard her name mentioned during one of the band’s earlier singles By The Way.

Stadium Arcadium differed from their previous outings, due to Frusciante’s guitar style. His playing had evolved from his signature ‘less is more’ approach, in which he created tonal texture via chord patterns similar to those used by Fugazi and The Cure, to a more flamboyant approach favoured by the likes of Eddie Van Valen and Steve Vai. He hadn’t rocked this hard since Mother’s Milk – his first full-length with the band – and this rediscovery of his love for riffage was largely influenced by progressive rockers The Mars Volta.

Kiedis told Rolling Stone magazine: “John’s always had an understated confidence, but he likes being loud now, and part of that came from hanging out with The Mars Volta…John’s always been capable of that. But he didn’t feel it. Now he feels it.” Kiedis’ contribution to this track manages to squeeze in a mention of their home state among the ballsy riffs: “I got a brother makin’ trouble in the state of California.” Do you think the band have had their fill of California by now? Hell, no.