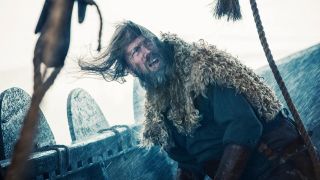 The singer says he is fed up with the term and adds that it is only applied to them because of their lyrical content. By that logic, he says, Iron Maiden and Black Sabbath are viking metal bands too.

Hegg recently wrapped up filming on new movie Northmen – A Viking Saga, in which he plays a viking warrior called Valli. And Amon Amarth sing about viking culture and even feature images of the warriors on their artwork – but still Hegg would rather not be branded a viking metal band.

“You can make the list very, very long. And we’re nothing alike, musically. I think to make the label based on lyrics is taking the easy way out. Rather than describing what the audience can expect to hear, they just add add ‘viking’. It’s an easy way to do it.”

Hegg also discusses his acting work on the film, which was shot mainly in South Africa. He says he enjoyed the experience, although he can’t say whether or not he is a good actor.

He says: “Trying to get into a character is a strange feeling. I never really knew what it took before I did this. But you really have to think, ‘All right, I’m not Johan Hegg. I am this guy.’

“So when you look at that guy over there and you hate his guts, you really have to hate his guts. You have to say that in your head, because all of a sudden, it just comes out that way. It’s a strange experience, but a lot of fun.

“I don’t know how good of an actor I am. The director was really, really happy. One of the producers, and I will take his word for it, Frank Kaminski – he’s a great guy.

“He’s not a guy of many words, but he came up to me and said, ‘If we had known that you could act this well, we would have given you a bigger part.’ But it’s supposed to be a cameo. I wasn’t supposed to be in that movie for a long time, and they added stuff for me to do in the movie.”

Amon Amarth released their ninth album Deceiver Of The Gods in June.