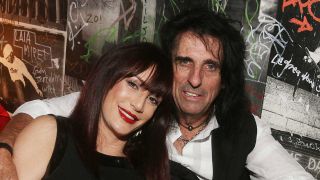 Alice Cooper has denied reports that he has a death pact with wife Sheryl Goddard.

In an interview with The Mirror, Alice reportedly said of his wife of 45 years: “I couldn’t live without her. We always said there will never be a time when one of us will be mourning the other.

“Whenever it does happen, we are going to go together.”

But the singer has subsequently shot down that he suggested the pair had made a suicide pact, instead insisting that they had made a “life pact”.

“What I was meaning was that because we’re almost always together, at home and on the road, that if something did happen to either of us, we’d most likely be together at the time.  But neither of us has a suicide pact.  We have a life pact.  And, besides, I’m booked through 2028, so…”

Ailce is currently on tour with Hollywood Vampires, the band he formed with Johnny Depp and Joe Perry. Their second album, Rise, is out now.