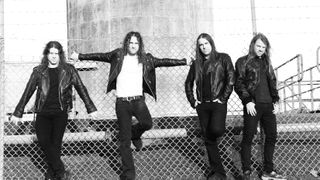 Airbourne have made their new single Breakin’ Outta Hell available as a stream exclusively through Metal Hammer.

It’s the title track of their upcoming album which will be released on September 16 through Spinefarm Records. Their fourth studio album also sees the band team up with Bob Marlette, who produced their 2007 debut Runnin’ Wild.

The single will be released on July 8.

The band were recently announced as guests on Volbeat’s European tour and kick off a long run of summer festivals and headline shows on July 11.