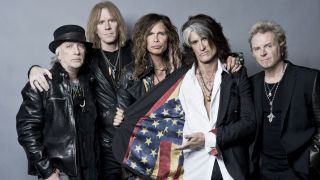 Aerosmith say they were inspired to film last year’s Download headline set after seeing gigs on TV by artists including Foo Fighters.

Aerosmith Rocks Donington 2014 was released this week across the US – and frontman Steven Tyler reveals watching high-def music channel Palladia was a driving force behind the decision to record the landmark concert.

He tells Rolling Stone: “They show a lot of festivals, so whenever you turn it on, you see the Stones or Tom Petty or Foo Fighters and they’re fucking kicking ass. You’re watching it in your hotel room and you realise, ‘That’s a great format.’”

And guitarist Joe Perry considers it one of their best performances from last year and felt everything clicked into place as soon as they hit the stage.

He adds: “We were really picking up speed. As you get near the end of a tour, the band gets better and the shows get better. The audience was on the money, the weather was decent – it felt like a special show.”

Even after 45 of playing together, Tyler reports when they play certain tracks live, he can still remember the emotions he was going through when they were first recorded.

He continues: “Every time we go on stage and play, we’re reminded of exactly why we did it back then through the songs. Like when we recorded Train Kept A-Rollin and we were angry as fuck at radio stations who weren’t playing Aerosmith.

“Every time you play that song now, you’re still reminded of the anger. You kind of live it again.”

They haven’t decided if they’ll record a follow-up to 2012’s Music From Another Dimension, but guitarist Brad Whitford said this month that he believes Tyler’s current solo album work might provide the spark they need to enter the studio.