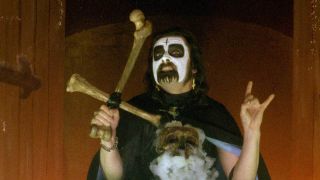 As you’re no doubt aware, today is Friday 13th – the unluckiest day of the year! So stop walking under ladders and staring at singular magpies like it means nothing, EVERYTHING IS GOING TO GO WRONG! Apparently. If you are the superstitious type, here’s 13 songs to remind you of how fucked you are today.

The ace of spades has been feared as a harbinger of death ever since the mid-18th century, when it was used by Caribbean pirates to condemn a traitor (the card’s single black spot indicating that the recipient was “on the spot,” i.e. in trouble). The superstition took a further twist as a psychological operation of the Vietnam War, when US military took to scattering these ‘death cards’ on Viet Cong corpses.

Traditionally midnight is the time demonic beasties are most active, and connections between the real world and the supernatural are most powerful. According to Geordie philosophers Venom, it is a time when pentagrams are unveiled, the heat of Satan’s breath is felt, warriors of death are seen in the skies, Satan takes his bride and all Hell breaks loose (natch).

Mercyful Fate – Curse Of The Pharaohs

Although some Egyptian tombs had curses inscribed warning against disturbing the resting place of a pharaoh, this comparatively modern superstition gained currency from the opening of Tutankhamun’s tomb in 1922, after which some members of the expedition died ‘mysterious’ deaths. As King Diamond warns, “Now if you’re breakin’ the seals and disturbing the peace, then you’re startin’ up a curse, bringin’ evil disease.”

First song on the first demo by the Swedish doom pioneers, Crystal Ball is a childishly simplistic description of the superstitious art of glimpsing the future in a translucent spheroid (still a favourite prop of bogus funfair fortune-tellers). The song also references the ‘Talisman Of Seth’, a reference to Satan’s mummified penis in Dennis Wheatley’s occult opus The Devil Rides Out.

“Sleek and shiny, dark and fast, never let it cross your path” insist this neoclassical quintet, sheltering within their ranks an uncommonly gifted brace of guitar prodigies: Marty Friedman and Jason Becker. “Don’t mess with the black cat if you believe in superstition,” the song continues, whereupon it’s clear these Californian shred-heads were a lot better at guitar playing than writing lyrics.

The title itself is a dead giveaway; the whole album is virtually a celebratory compendium of old-school superstitions and supernatural folklore. Among the spiritualist tropes so crucial to the album’s concept are such hardy perennials as dream divination (Infinite Dreams), scrying (Can I Play With Madness), astrology (Moonchild), numerology, faith healing, extrasensory perception, precognition and clairvoyance (passim).

Beyond Dawn – As The Evening Falters, The Dogs Howl

Although the song contains only twelve words – “Kill for love, kill to love, love to hate, hate to love” – the howling of dogs is rich in superstitious lore: “That dogs by their howling portend death and calamities is plain by history and experience,” asserts the 1652 text Arcana Microcosmi, and this brooding, building nocturne by Norwegian goth-jazz-triphop-doom loons certainly wallows in its portentous and deathly atmosphere.

Belief in a malevolent stare that casts a curse upon whomever it transfixes has existed across cultures for millennia. Inevitably, when SoCal stoner petrolheads Fu Manchu tackled this superstition they gave it a vehicular twist; the evil eye has fallen upon a hotrod, ensuring its failure in an illicit drag race (“Wheels of his heap, hits the backstreet wall, evil Eye has signalled, unapproachable”).

“Bad luck wind been blown’ on my back, I was born to bring trouble wherever I’m at, With the number 13 tattooed on my neck,” howls Danzig. But there’s no definitive source for 13 being considered unlucky; could be Judas was the thirteenth disciple, or murderous Loki was the thirteenth Norse god. Either way, it persists in metal’s consciousness, put to great use by Danzig, Black Sabbath, Megadeth, Anvil, Venom, King Diamond, Premonition 13, Hour Of 13, Wednesday 13 and Liz Buckingham’s old band, 13.

True cult early Brazilian black metal pioneers Mystifier had already written their incredulous repudiation False Superstitions Made By Tellers Of Legends in 1999, but they were to revisit the theme two years later with a similar demolition of old wives’ tales: “Cross your fingers, knock on the wood, don’t walk under a ladder, avoid a black cat, make safe the life, damned mongers of fate, cursed me in disgrace, amuse with my credulity, command over my destiny.”

On Hex, prolific Ohio-based occult death metallers adapt a ‘genuine’ evil spell, copyrighted online to “Pioneer Of The Unknown” Puzuzu, who introduces it on his website spellsandmagic.com: “Here is a great Hex to bring total chaos to your enemies” before going all Blue Peter on our arses: “You will need a piece of thick string or yarn about 9 or 10 inches long…”