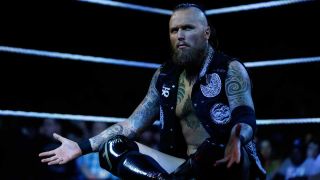 Whether it’s The Undertaker lording it up as God Of All Goths or Triple H getting played to the ring by Motörhead, wrestling has always been metal as fuck. In the last five years, a whole new generation of alternative wrestlers have risen up to dominate the face of the industry, from indie companies like Progress and ICW being awash with heavy, guitar-driven theme songs to the WWE placing proud metal reppers like Baron Corbin, Dolph Ziggler, Bray Wyatt and Paige as featured superstars.

In fact, not only is the current champion of the WWE’s increasingly prolific and celebrated developmental division, NXT, an iron-cast metalhead, but he may just be the most metal wrestler to ever lace up the boots. Aleister Black looks like he’d be just as at home playing in Black Tongue as kicking people’s heads off for a living, packs an entrance taken straight out of a gothic horror novel and can be seen spending his spare time repping for the likes of Venom Prison, Immortal and Satyricon on Twitter. He’s been played to the ring by Code Orange on live TV, got an endorsement deal with Blackcraft and even appeared in Ghost’s internet-imploding Instagram story that debuted recent track Dance Macabre. With Black appearing alongside his fellow NXT superstars at this coming weekend’s Download festival, we caught up with the man himself to talk wrasslin’, metal and everything in between.

Hi Aleister! You’re appearing at Download this weekend with NXT. Can you remember your very first time at the festival?

“Yes, actually! Progress had a show there, the year before I got signed to WWE. I wasn’t really in tune with the festivals in the United Kingdom because I was wrestling so much and because they weren’t in my country, but I’d of course heard of Download. I was never around for it before then because I was always wrestling somewhere.”

What did you think of it once you got time to explore properly?

“I remember that everyone was telling me that I had to bring wellies, because it can be pretty gross, but I didn’t have any! I was like, ‘It can’t be that bad,’ so I wore these really cheap, white sneakers to my first Download. Dude, within three seconds, they were grey and black, ha ha ha! I came in on the Sunday, and I watched Slayer, Every Time I Die – Andy from ETID is a good friend of mine, so I wanted to catch them – and Body Count. What an experience, man. You can see it on television or on YouTube, but nothing is as good as just being there. I remember seeing Slayer with [independent wrestler] Rampage Brown, we were standing on top of the hill, and Slayer were there, right in front of us. I was looking at him and he was looking at me and we were like, ‘Damn, this is insane.’ You see all these collective people together, their minds going, ‘This is the best time of our lives, and we’re not letting anyone tell us how to live them.’”

What was it like going back there with NXT last year? It’s become a huge part of Download weekend now

“We would enter into the backstage area, we’d drive through in the bus, and the whole thing just blew my mind. The production, the way that Download and NXT have worked together to make it look like the coolest thing in the world. Wrestling and metal, it just goes hand in hand. I’ve said this before, but I think it’s because of my lack of talent as a musician that I’m a professional wrestler. Metal is the coolest, and it has so many similarities to what we do. Bands travel, we travel; bands perform somewhere every single night, we perform somewhere every single night.”

Are people starting to realise that a bit more now? We’re now seeing the likes of Code Orange getting airtime on WWE television.

“I don’t think it’s people are just realising now, but I think it’s something that people are accepting more. People always knew that metal, hardcore and the alternative lifestyle goes hand in hand with wrestling, because our biggest fanbase is alternative kids. These kids listen to alternative music, they live in their own world, they’re creative, they’re individuals, and that’s why they choose to listen to metal; it’s an outlet for them, and wrestling is an outlet for them.”

You’ve become something of a spokesperson for the scene; kids actually ask you on Twitter for recommendations now.

“Yeah, for sure, man. It’s the coolest thing when you get to be able to help people like that. People ask me about genres, about what I think of certain bands. Every once in a while a band slips through where I’m like, ‘It’s not my kinda stuff’, but it’s cool to see that people have accepted that part of me.”

What albums are you listening to at the moment?

Aleister Black will be appearing with NXT at Download festival this coming weekend, June 8-10.