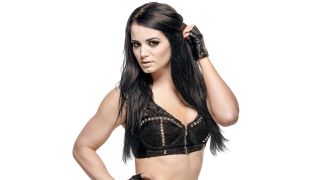 WWE Diva and honorary metalhead Paige is not only wrestling at one of her company’s biggest shows on August 23rd – she’s also the face of a brand new monster truck game featuring some of wrestling’s biggest names! We caught up with the two-time WWE Divas champ to talk about both of those things, as well as converting some of her fellow wrestlers to the dark side…

Hi Paige! What are you listening to at the moment? “Weirdly, travelling with some people, they’ve listened to country music. I’ve never been interested in country music ever, so I’ve been listening to a couple of country things – don’t judge me! It’s only because of the people I travel with! But my boyfriend’s in A Day To Remember, and I listen to that, and I listen to a bunch of different stuff, like Bring Me The Horizon.”

What did you think of the recent Bring Me stuff? “Happy Song is pretty good, but I preferred Drown. I love the heavy stuff, but I liked Drown because it was completely different. I like how Bring Me The Horizon evolve and change throughout their career. Not everything’s gonna sound the same when they bring out a new album.”

Do you try and get to gigs whenever there’s one in whatever town you’re wrestling in? “Yeah, and you know, if my friends are around, like, if the Every Time I Die boys are around, I’ll try and sneak away and go and watch them. It’s weird how all the bands know wrestling – they contact me to try and get tickets for the shows!”

**And NXT is now getting booked at festivals in the US… **“Yeah, and NXT are starting to use bands’ [music within their shows], like they used Sleeping With Sirens and Motionless In White.”

Who else in the WWE Divas division is into rock and metal? “Well, Summer Rae was already into stuff like Taking Back Sunday, but when me and her became friends, I introduced her to a lot of stuff, and she loves it. I introduced her to Stick To Your Guns! She doesn’t look like she’d be into that, she’s this blonde-haired, beautiful model, but she’s moshing now, ha ha! Also, when Rosa Mendes met me, she was into house music, and I hated it, so I had to change that. But I don’t think most of the girls like it too much; when I put something on in the locker room, they’re all screaming, like, ‘Get it off!‘”

**Summerslam’s just round the corner, and you’re in a huge match with eight other women. Why do you think WWE has put the spotlight on women’s wrestling more recently? **“I feel like the ‘revolution’ started when it was the first NXT live special, when they gave me and [NXT Diva] Emma the chance to ‘go’. That gave the other girls a chance to really kill it, and the fans started to really get behind it. As soon as the fans kinda rebelled after us getting maybe 30 seconds in the ring one day, I feel like WWE really took noticed and said, ‘OK, the fans really do care about the divas!’ It took them a little bit, but once they brought all these NXT divas up, they had no choice, ha ha! And people are so into it – it’s one of the highest-ratest things on the show. And Vince [McMahon, WWE owner] and Hunter [COO Triple H] have been absolutely amazing. Smackdown last week, the girls had three segments! I thought that was amazing.”

**What can you tell us about this WWE vs MMX racing game, then? **“It’s monster trucks, and you’re racing them, and the graphics are amazing, and you get to blow stuff up! It’s amazing! I’m featured alongside Undertaker, John Cena, Triple H and Stone Cold Steve Austin. It’s pretty amazing company, I’m not gonna lie!”

**Plus, Monster Trucks are pretty metal. **“Yeah! Make sure you download that bad boy!”

Download WWE vs. MMX via the App Store and Google Play.

WWE Summerslam takes place August 23rd at the Barclays Centre in Brooklyn, NY and can be watched live on the WWE Network.

WWE Diva Paige discusses her love of rock and metal