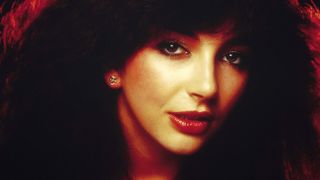 You have certain rules in music and Kate Bush just doesn’t keep to the rules. That’s how she makes music: from the heart and with emotion, don’t think too much about the rules. Some musicians can read the notes and they are perfect, they come from the conservatory and they are brilliant at doing other people’s songs, but they can not write a song themselves. And then you have people who just write from emotion. But with Kate Bush you can see that she can read notes, she is very talented, she plays the piano, but she also has the freedom still to write whatever she wants, she still found a way to creativity. That’s very special. She has both things.

Her music is very magical in a way – the song structures are sometimes a bit strange, the way she begins a song gets your attention straight away, but also the way she dances on stage. Nothing was regular or normal about her – she always kept to her own way of writing songs and presenting herself. It was totally different to anyone else at that time, and I think a lot of people got inspired by that. She always kept to herself, never imitated or adapted from other people. That makes her very special in my view.

My favourite is still the first album, The Kick Inside, with Wuthering Heights on, because the first time you listen to an artist and fall in love with their music, that’s the one you hold close and keep in mind always. I also like the way she was discovered by Dave Gilmour – he gave her time and space to develop her first album. It’s such a delicate process to discover your own identity, and he gave her the space to do that. I think it was really important. That may also be why she has had so much success for such a long time, because she had the time to grow up with her music.

Within Temptation play two sold out shows in Tilburg, Holland in December.

The Within Temptation Quiz