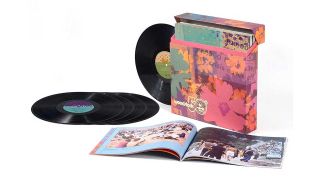 As the decades wear on, the Woodstock festival of 1969 becomes less of a rock concert and more of an emblem, a gold star pressed firmly into the hippie generation’s forehead; a proud, beaming moment in a rolling sea of bad trips, bloody protests and war-on-everybody.

It was that one weekend where everything worked out, where it all just clicked, where free love and cheap drugs and fuzzy rock’n’roll was quite obviously the answer to all of life’s problems. It was the calm eye in the world-thrashing storm that was the 1960s.

To celebrate the festival's 50th anniversary, Rhino Records have released Woodstock: Back To The Garden, the most comprehensive round-up of festival audio so far, featuring music from Santana, Canned Heat, Creedence Clearwater Revival, Jimi Hendrix and the rest.

The album is available in four editions: a mammoth 38 CD, 432 track box set (featuring 267 previously unreleased tracks), a 10 CD set, a 5 LP version, and a 3 CD collection. All are available to order from Rhino.

We've got a copy of the 5LP set to give away, and to be in with a chance of winning you only need to answer the question below.