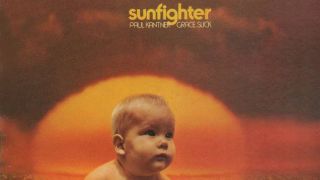 Getting it together in the country was very much the fashion when Paul Kantner and Grace Slick left San Francisco for the rural surroundings of Bolinas, some 30 miles north-west of the city. With Jefferson Airplane grounded, the couple unwound to the slower pace of life, emerging with a striking collection of songs.

It’s not a concept album per se. However, with their newly born daughter China held aloft by one arm of each parent on the record’s sleeve, it’s not entirely surprising that the themes of many songs deal with change, rebirth and transformation. With allusions to cycles of time, the ineffable workings of nature and images of the moon and the sun embedded within much of the work, there’s a freewheeling density throughout.

Joined by an eclectic cast that includes the Grateful Dead’s Jerry Garcia, Graham Nash, David Crosby and fellow Jefferson crew members Jack Casady and Peter Kaukonen, it’s a powerful album. Even when bolstered via the strategic deployment of Tower Of Power horns and the Edwin Hawkins Singers, Grace Slick’s forceful vocals cut through the instrumental layers with an impressive precision.

Sunfighter is rich in depth and detail, and for all the hedonism of the times, it’s tempered with a mindful degree of control. It might be supposed that it extols the virtues of the hippie lifestyle. Not a bit of it. Million is a salute to Kantner and Slick’s urban roots, while Silver Spoon’s satirically graphic lyrics on the benefits of cannibalism take aim at the pious vegetarians inhabiting Bolinas.

Combining open-minded structures into straighter songwriting, the album’s centrepiece, When I Was A Boy I Watched The Wolves is stoked with fiery licks from Garcia, sparking at shifting time signatures and the intoned choruses as if from some nearby pagan invocation. Musing upon the nature of packs and loners, and alluding in part to the radical political groups of the day, such as the Weathermen, its dark, brooding presence continues long after the track has finished.

A personal act of renewal for Kantner and Slick, Sunfighter stretches and pushes at boundaries and convention, honouring something of their psychedelic origins, but keenly looking outwards to new shores.

It's Prog Jim But Not As We Know It