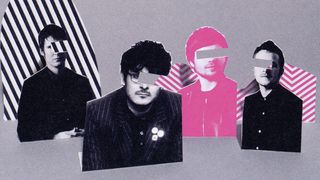 The energised clatter and urgent post-punk thrust of The Futureheads’ debut collection may not be an obvious contender for a prog album in disguise, but scratch beneath the surface and here was a band intent on stretching angular guitar rock into new shapes.

The signs were there early on: prior to forming the Sunderland quartet, frontman Barry Hyde played in a band with Peter and David Brewis of Field Music, who adhered to a manifesto that they pinned to their wardrobe door. It included such rules as: “no cymbals”, “everyone singing, all the time” and “drink lots of coffee”. Indeed it was Hyde’s dad’s record collection that partly influenced the emerging prog tones of the Brewis brothers, with Peter playing drums for The Futureheads early on, and recently revealing to Prog that Barry Hyde carried an XTC album with him at all times.

It’s the drive, economy, polyphonic vocal parts and time shifts that make The Futureheads a progressive record. From the barking stomp of opener to Le Garage through the rhythmic swing of Decent Days And Nights to the metronome-gone-haywire mayhem of Trying Not To Think About Time and onto the high-tensile, art-punk brilliance of closer Man Ray, this is an album that has been thought out. Contrived rather than conceived in the moment. And it’s all the better for it.

If The Futureheads – who are currently on something of an indefinite hiatus – were a punk band, then it is the innovative end from which they draw influence: chiefly Devo, Wire, XTC and Gang Of Four, whose guitarist Andy Gill produced some tracks, as well as some of the American underground’s more cerebral bands.

Here Hyde and Ross Millard’s wired guitars duel in a constant interplay of jagged riffs, all four members do indeed sing – often at once – and not a single ounce of fat is included. Cryptic lyrics meanwhile pose rhetorical questions, document first days in dull jobs, fairground encounters and the modern urban experience, and beneath it all lies an English folk sensibility that The Futureheads would explore in later work.

Pitchfork described it an album that “contained so many structural shifts, operatic harmonies, and loopy melodic fragments, it was practically a prog rock album smashed into two-minute smithereens.”

But it was a cover of Kate Bush’s Hounds Of Love, in which the quartet’s tender barbershop harmonies helped turn the ethereal masterpiece into an rousing guitar pop anthem, that saw the band score a Top 10 hit. It remains one of the great cover versions, but the entire album is a brilliant combination of ideas, arrangements, pop precision and youthful energy.