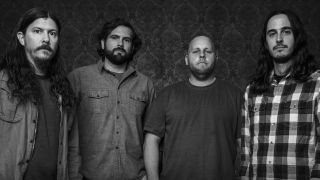 Los Angeles progressive post-rockers Moving Structures weren’t content with just getting a debut album ‘out there’. Instead, they laboured for four years to create the conceptual Awake, living together in one house and working up the tracks, before eventually recording with Aaron Harris of post-metal giants Isis and Palms. Rather than being a loose concept, Awake was meticulously planned. As drummer Chris Marquard explains, “The origins of it stemmed from a college project that I had done, which was basically the auditory soundscape of a burial at sea.”

The band itself grew from there. “One of the guitar players, James [Moore], and I met at recording school, and the two guitar players [James and Mitch Wayte] grew up together, so they’ve been playing together since childhood.”

The writing then had to evolve to take in the other members, which was mostly a case of band chemistry. “A large part of our writing process is simply just jamming, finding elements within that jam we like and building upon that,” says Marquard. “We wrote probably the majority of the album at our house… unfortunately we lost that space, and then we wrote the rest of the album at a studio we just rented.”

The tracks on Awake vary between atmospheric songs, like Burial and Vast. Cold. Lonesome., and much heavier, denser fare, such as the Tool-like The Last Of Light & Love. Other highlights, meanwhile, such as Hadalpelagic, more closely follow the blueprint of dark post-metal like Russian Circles, with tapped guitar figures and fleeting hints of discordant metal. For all that, though, Moving Structures have their own sound, though Marquard is quick to acknowledge the band’s influences.

“We all come from different areas, so there’s different pieces from certain artists, but I think in my mind I definitely hear the Tool influence: all of us are big Tool fans. James is a big Pink Floyd fan, so there’s a lot of that mixture on there too. Kevin [Lewis, bass] is huge with Russian Circles and Isis.”

As a result, they’re often described not just in terms of their progressive influences, but also through the lens of post-rock and post-metal, a fact the band are sanguine about. “I would say that I’m not opposed to it, and I think all of us would call ourselves post-rock to a large extent, because I think a lot of the elements that define that can be found within the album, but I think we also are a little bit unique… a lot of bands fall into a sound they think those genres should be.”

For his part, though he doesn’t presume to speak for the whole band, Marquard is clear what it is he loves about music. “I love the feeling you get when you really like songs other people write and you really identify with… I love the fact you can possibly create something that someone will really like to that level of a song or artist you really like. Knowing you created some sort of art that helped someone, or something that emotionally really touched them, is a really cool feeling.”

Current release: Awake is out now and is self-released

Shaman Elephant: It's jazz rock, Jim, but not as we know it