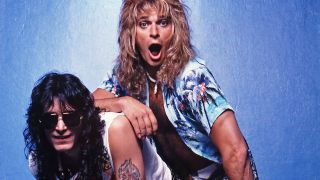 David Lee Roth’s Skyscraper has been voted number 20 in our countdown of the 100 Greatest Albums Of The 1980s. Read the full article here.

The worst thing that happened to Skyscraper, David Lee Roth’s second solo record, was that it followed 1986’s Eat ’Em & Smile, his first post-Van Halen album. Spontaneous, raw and a bloody good laugh into the bargain, Eat ’Em & Smile was a massive ‘fuck you’ to those who viewed Diamond Dave’s exit from Van Halen as a rock’n’roll suicide by any other name. The album teamed the Sunset Strip’s biggest ego with the best rock musicians on the planet: guitarist Steve Vai, bassist Billy Sheehan, drummer Gregg Bissonette.

Where Eat ’Em & Smile was raw, visceral and a critical success, Skyscraper divided the faithful for the same reason Van Halen had bugged some of their fans with the 1984 album: for being keyboard heavy, slick and far too polished. Roth’s earlier album gets the plaudits all these years later, but Skyscraper is bloody good.

“Dave and I were enjoying working together so much that we created our own little production team,” Steve Vai says of the birth of Skyscraper. “We just started chipping away at it and we said let’s just continue the way we’re going and see what we come up with. So that’s really how the production side of the record unfolded.

“It was inevitably gonna sound different,” he continues. “Ted Templeman produced Eat ’Em & Smile, and he had a very particular approach: raw, visceral, to capture the energy and, you know, go for it. You’re thrown in a room and you play your ass off, and when you get something good, there it is. You have to remember that Dave had been doing that his whole career with Van Halen.”

Basically, Roth didn’t want to cut Eat ’Em & Smile Mark II. And that willingness to progress was music to the ears of Vai.

“We liked the way it was coming out,” says the guitarist. “It was an intense process mixing the record. My production skills, and Dave’s, and the approach that he wanted to take, were just very different from Ted. So the record has a different sound, a different feel. It’s not as visceral as Eat ’Em & Smile; I’m fully aware of the difference in those records. But by the same token, you get a guy like Dave Roth, and he’s done so much in one way and, he wanted to try something different. That’s the artist’s creative prerogative.”

Working in the tight confines of a recording studio with someone packing an ego the size of David Lee Roth’s might sound hellish, but that’s not how Vai recalls the experience. “We got on really well!” he says. “We were friends. People have this image of Roth as being this rock star with a crazy kind of personality, and he is that. But as a partner in the creative process, he listens and doesn’t assume to know everything. He doesn’t feel he needs to come to the table with everything, so he surrounds himself with good people. We saw that with Van Halen. I mean, you don’t argue with Dave [laughs], but if you have a perspective or an opinion, he’s interested in hearing it. If it’s a good idea, he’s happy to go with it.

“You have to remember it was his band,” Vai continues. “He made all the executive decisions. I’m very good at assuming a role and knowing where my boundaries are. I expect that from other people when they’re working with me. So it worked out really well.”

While the album included the hit single Just Like Paradise, it’s songs like Hina, the Stairway-esque acoustic classic Damn Good and the title track that Vai is most proud of. “That’s a really cool song,” he says of the latter. “I like the chord changes and the energy. But I think Hina is probably my favourite. It’s very creative. It’s got the guitar delay thing that goes left and right, and the way I play off of the delay is unique.”

Of course, the album features some outstanding playing from Vai. From the delay-fuelled intro of Just Like Paradise to the seasick delivery of the solo on Stand Up, the kid who made his bones with Frank Zappa, post-Malmsteen Alcatrazz and the very special Album with PiL played his nuts off. It’s like he’s trying to outplay his achievements on Eat ’Em & Smile.

“Well it wasn’t a conscious effort,” he responds. “An artist is always looking to raise their own bar. What I’m used to doing is working on stuff and getting it down, and I was able to do that more on Skyscraper… and I was able to do a lot more production things like doubling guitars, harmonies, and making sure if I was on a doubled rhythm part that it was really tight because I had the time to do that.”

When this writer caught DLR and Vai on the ’88 Skyscraper tour it seemed like they were having more fun than any one band had a right to. It was rock’s greatest vaudevillian sparring with the rake-thin cat that played the Devil’s guitarist in the ’86 film Crossroads.

Inevitably, it all went tits-up, with Vai and Sheehan moving on. A diplomatic Vai says today: “It was really fulfilling to be in Dave Roth’s band all those years. But I had the right amount of it.”

Overshadowed by its predecessor it might be, but listened to without prejudice today, Skyscraper is an absolute blast. Some contemporary reviews were unkind. “Maybe the class clown is just outclassed on record by his band,” Rolling Stone sneeredof Roth’s performance on the record. Yet Chris Willman of the LA Times was bang on target: “Doggone if David Lee Roth’s second solo album isn’t the most flat-out rambunctiously enjoyable hard rock album since, well, David Lee Roth’s first solo album.”

In Praise of David Lee Roth – by Greg Puciato

All I ever really needed to know, I learned from David Lee Roth