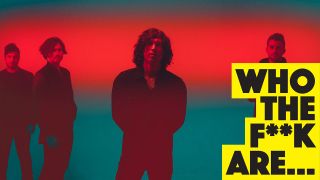 Texas hard rockers Nothing More have just been nominated for three fucking Grammy Awards, which, as anyone can tell you, is fucking big business, and puts them ahead of both Mastodon and the fucking Foo Fighters in terms of nods. Having recently supplied the soundtrack for the trailer of one of the biggest fucking blockbusters of 2017 can’t have damaged their profile any, while single Go To War has just been crowned the biggest fucking song in the US.

In short, they’re about to get absolutely fucking massive.

But who the fuck are they, what the fuck do they want and why the fuck should we care? Here’s why…

Who the fuck are they?

Nothing More have been rocking the fuck out since 2003, when frontman Johnny Hawkins met guitarist Mark Vollelunga at, erm, church camp. Say what the fuck you like about ‘em; this is literally God’s fucking music.

Bassist Daniel Oliver joined once he’d got the fuck out of high school in 2004, and noob Ben Anderson took over on drums in 2015. They’ve released five albums since 2004, and while the first two did fuck all, 2013’s Nothing More went top 40 on the Billboard album chart while the newly-released The Stories We Tell Ourselves smashed right in at number 15, which is pretty fuckin’ good by anyone’s standard.

Frontman Jonny is the absolutely shredded uberbloke that smacks a massive fuck-off drum all the fucking time.

Hard as fuck crunchy riffs with a slight metal edge all polished up with a fuck-ton of gleaming, radio-friendly production. Imagine if Nine Inch Nails colluded with Royal Blood and Biffy Clyro and you’re sort of close.

Fuck it: listen to track Go To War below and you’ll get the general idea. It’s catchy as fuck. You’ve been warned.

Jenny, taken from Nothing More, has been streamed over 18 million fucking times on Spotify and its official video watched almost 13.5 million times on YouTube. To clarify: that’s a lot of fucking views. But fuck the fan favourites: we’ve had a soft spot for early single This Is The Time (Ballast) ever since we nabbed its UK premiere back in 2014. That’s right, fuck the Grammys: we’ve been championing the fuckers since fucking forever ago.

What’s their best fucking video, then?

We could be cynical here and say that OBVIOUSLY the best fucking video these guys have ever made is our no-fucking-holds-barred tour confessional they recorded with us in 2015, but we’re better than that. Instead, let’s go for most recent single Don’t Stop, which as well as featuring a cameo from none other than Papa Fucking Roach frontman Jacoby Shaddix, sees frontman Jonny return to his shirtless ways, much to the relief of YouTube’s viewing public.

What do people say about the fuckers?

Apart from endlessly banging on about how fucking sexy Jonny is, people totally fucking like these guys. Our sister title Metal Hammer just gave The Stories We Tell Ourselves a very decent 8⁄10 review, and they’re never wrong so there you fucking go. Elsewhere, Loudwire have dubbed it “one of the best albums of the year” while AXS gave it a full five out of fucking five.

What the fuck do you guys think of ‘em? Let us know in the comments below.

Nothing More - The Stories We Tell Ourselves album review

The 10 albums that changed my life, by Nothing More's Jonny Hawkins

Q&A: Jonny Hawkins and Daniel Oliver from Nothing More