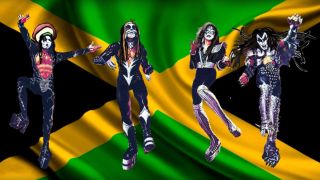 “A good song is a good song,” says Christopher Hansson. “Kiss songs are very direct and based on strong melodies. We love Kiss, so it became a natural choice. Everything is done with the greatest love and respect for the original.”

This might sound like the worst idea since Kiss themselves launched a range of lycra cycling shorts, but one listen to Reggae Kiss may have you hankering for more.

Take the band’s recent cover of Creatures Of The Night, which it sounds like it might have been recorded at Studio One in downtown Kingston. All the requisite parts are in place: the taut, rattling snare, the wobbling bass, that squelching clavinet sound, the steel drums, and a group of backing singers who sound like the I Threes.

The idea for Reggae Kiss came out of a Dressed To Thrill jam in 2013, and two years later the band uploaded their first song, a cover of I Stole Your Love, to YouTube. “We could not dream of the positive response we received, worldwide,” says Hansson. Since then, the band have gone on to record covers of songs like God Of Thunder, Love Gun, Unholy and New York Groove.

“Certain songs clearly work better than others,” says Hansson. “It has to do with the structure of the song and the chord sequence, which must work well as credible reggae. Surprisingly, many Kiss songs do. We have a lot of fun in the studio and I think it is reflected in the music.”

Reggae Kiss have proved you can take Kiss songs and twist them into an altogether different shape without losing the essence of what made them decent songs in the first place – or without turning them into comedy pieces – but one question still has to be answered. Have they had any reaction from Kiss themselves?

“Yes, we have!” exclaims Hansson. “Kissonline, the official website of the band, has featured several of our videos. But the coolest thing is that Paul Stanley and Gene Simmons have both given us “thumbs up” and shared our videos on their personal Facebook, Instagram and Twitter pages. It feels awesome to get that response by one’s idols. It’s like a childhood dream coming true.”

For more on Reggae Kiss, visit their Facebook page.