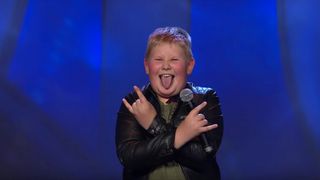 Amidst all the magicians and acrobats, Oliver Rytting — a 12-year-old heavy metal singer from Lidingö in Stockholm — was always going to make an impact on TV talent show Sweden’s Got Talent.

He stunned judges with a rowdy rendition of Kiss’s 1984 hit Heaven’s On Fire, delivering a performance that saw plenty of fist-clinching, a brief moment of air guitar, and a rousing finale complete with devils’ horns.

“I realised I liked the hard rock for a very long time ago,” says Oliver, “partly because my mother listened to it. When I was three years old, I started to love hard rock. And I love this music about as much as I love my mother.”

Asked what he’d do if he won the competition’s first prize (500,000 Swedish Krona, about £44,000), Oliver said most of it would be spent on “better studio space, so that I can actually continue with the music. The rest would go to one of my favourite organisations, to save the sea. I don’t remember what it’s called, I think it’s the WWF or something. I just love the sea.”

Oliver’s performance didn’t meet with universal approval from the judges, but he was sent straight to the competition’s semi-final after judge David Batra — a Swedish comedian and TV actor — pressed the “Golden Buzzer”, a device each judge is allowed to use just once per season.