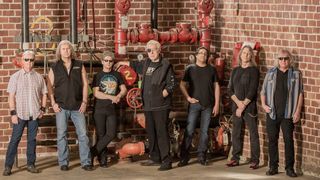 For a band that released seven captivating albums in a six-year period during the 70s, a gap of 16 years between studio releases seems absurd. But there were substantial reasons behind that hiatus since 2000, not least the fact that singer Steve Walsh was suffering from vocal problems that eventually became the catalyst for him to leave the band in 2014. Add the fact that he apparently had little interest in recording again and the likelihood of Kansas ever releasing new studio albums appeared remote. But now they’re finally back with a new album and singer, as their guitarist and founding member Richard Williams explains.

“Steve was really struggling and it wasn’t like we wanted to get him out of the band,” he says. “You can’t go in and make a record if not everyone wants to. He felt, ‘Why are we doing this? I don’t have any songs written, it’s going to cost money and nobody is going to give a shit.’ When that’s the attitude, you really can’t force people. Steve had been struggling for years with his voice, but besides that, he just wasn’t enjoying it any more.”

It was the deterioration in Walsh’s voice, coupled with that apparent lack of fulfilment within Kansas, that would lead to the singer’s departure.

“I remember Steve, Phil [Ehart, drummer] and I were having one of our yearly meetings and Steve was very morose,” explains Williams. “I just said to him point blank, ‘God, Steve. As much as I love doing this, you hate it an equal amount. I can’t imagine how miserable this must be for you. You clearly hate it.’ I really felt for him and eventually Steve said, ‘I’ve had enough.’

“We are a new creative entity that’s out there kicking butt. This isn’t just one album, the last gasp of a bunch of old farts taking one more lap around the track.”

“Steve poured his guts out on every stage on the planet for 41 years. He lasted longer than Kerry [Livgren, guitars/keys], Dave [Hope, bassist] and lasted longer than Robby [Steinhardt, violinist] did. Eventually, people just say, ‘I don’t want to do this any more.’”

Final gigs with band members departing on friendly terms can be emotional, with the end-of-an-era final bow and dressing room farewells having an unavoidable poignancy. For Kansas, though, this was keenly avoided, with Walsh rapidly departing after his final performance.

“It really wasn’t emotional,” says Phil Ehart. “Steve had his son there in a car sitting outside. We all kind of walked to the front of the stage together and waved at the audience. He walked off the stage, got into a car and they drove off. That was it. But that’s the kind of way people are from the Midwest of the United States. We’re just pragmatic people. It ended and we moved on.”

That moving on led them to recruit vocalist Ronnie Platt, whom Williams had met and seen perform live with Platt’s previous band Shooting Star. Kansas had allowed themselves a period of six months to locate someone suitable but Platt was given the position within a few days. His vocal talent wasn’t in question, but there were concerns as to whether he would be a good social fit for the band.

“We went on YouTube and saw him sing dozens of songs,” says Williams, “so we knew he was good enough, but we needed to find out if he was a guy we could work with. We spent the day getting to know each other and we called him two days later to give him the job. Phil and I do not delay.

“We had briefly talked with our former singer John Elefante but we felt that he was being hesitant, and Phil and I didn’t want anybody that felt they might want to join the band. We wanted someone who really wanted to do this. I’ve been doing this for 43 years. I make a commitment and stick with it and I was looking for that in somebody else.”

One of the most notable aspects when talking to Kansas now is how strongly they believe their new album, The Prelude Implicit, marks a fresh start, with the frustration of being unable to record for almost two decades now replaced with optimism. Yet for all that bluster, they admit there was some unease prior to entering the studio.

“There was a little apprehension about how it was going to work and where the music was going to come from,” admits Williams. “You know, ‘Is this going to suck?’ So we were a little bit nervous about it at first. We went to Florida to see what we could do. It was more of a trial to see what we were capable of as a unit. We were pleased with the results and once we got rolling, it just took off.

“The Prelude Implicit has a very literal meaning, not only about the album but about the band and the band’s future. This is a new musical beginning and we are a force to be reckoned with again. We are a new creative entity that’s out there kicking butt. This isn’t just one album, the last gasp of a bunch of old farts taking one more lap around the track. We’ve already scheduled in the next album in 2018 and we’re finally doing what we haven’t been able to do for a long time, which is play a lot more and write new music.”

Part of that renewed enthusiasm has been generated by the addition of guitarist Zak Rizvi. Rizvi had initially been approached to produce the album, but after he mentioned that he had written a number of demos with Kansas in mind, the band listened to them and were immediately convinced that he could play a more pivotal role.

“Not only did he have these great songs but he was also very instrumental in writing a lot of the other stuff for this record, collaborating with Ronnie and the other guys,” says Ehart. “So Richard and I looked at each other and said, ‘Why isn’t he in the band?’ He’s also a great guitar player and we had always been a two-guitar band anyway. As soon as the music started coming together in the studio, we knew this was going to be a really good record. The main thing about it is it sounds like Kansas. For us to make an album that sounded like someone else would have been really detrimental and that was very important.”

“Zak is unbelievable and it’s almost unfair that someone should have that much talent,” laughs Platt. “Everyone was also so focused and ambitious about doing this new record. The experience itself was so positive. We would all make suggestions about each other’s parts, come up with ideas, refine and rework things. For me, it’s really been one gift right after another. Just to get the job was one gift, being able to sing the Kansas songs I’ve loved all my life was another. To then find out we were actually planning to do a new studio album and have that come to fruition was incredible. For me to then also be a contributor lyrically to that album is amazing.”

Naturally, there will be Kansas fans who are reluctant to accept the band even existing without Walsh. However, the new album is startlingly reminiscent of their mid‑70s triumphs and should win over any detractors. Williams agrees, though he has little sympathy for those who refuse to recognise the new line-up.

“From the music, the lyrics, through to the cover, we wanted to make a quintessential Kansas record in a way that we haven’t in a long time,” he says. “That’s exactly what we’ve done. It was rehearsed, worked on, discussed and if you had an idea, you would throw it into the mix. That’s the way we did things in the days of old – six guys working together in the studio, making an album. But some people refuse to accept change and I get that.

“I would love to see The Beatles but two of them are dead. I can piss and moan and stamp my feet but they’re never going to be back together again. Unfortunately, it’s always the squeaky wheel that makes the most noise. There are still a few of them out there and I just don’t care. So if somebody wants to live 40 years ago, go ahead – I don’t give a shit any more. I’m busier than I’ve ever been, with the best band I’ve been in for three decades.

“We’re kicking butt, got a new album and all things are going good for me. If somebody has a problem with that, please stay at home…”

The Prelude Implicit is out now on InsideOut. See Kansas’ website for more.

The Story Behind 'Carry On Wayward Son' by Kansas