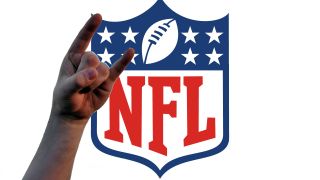 Yes! It’s Super Bowl weekend. Which means it’s our chance to stay up late, binge on nachos and wings, watch large lycra-clad fellas crash into each other at high velocity and stagger into work bleary-eyed on Monday.

And with NFL fever in the air, it got us to thinking… If NFL teams were bands – who would they be?

The current champs of the NFC and the bookies’ favourites going in to Sunday’s Super Bowl, the young Carolina Panthers are most definitely football’s Foo Fighters, with quarterback Cam Newton rivalling Dave Grohl for the ‘Nicest Man/Most Loved’ trophy. Like Dave, Cam’s a showman, stuffed full of charisma, good looks and – most annoyingly – the talent to back it up. And, just like Dave, he’s surrounded by other great players. Further coincidental factors? The Panthers played their first season in 1995, the same year the Foos’ debut album was released. Carolina’s team play in Panther blue and Dave plays a blue guitar. When Dave broke his leg last year, the Foos shows went on, and despite breaking his arm in their last game, Panthers linebacker Thomas Davis is all set to power through and play in the Super Bowl. We rest our case.

As a Raiders fan, we thought Dave Mustaine may object to this comparison, but having seen DM’s tweet from December 2013 “As a @RAIDERS fan, I can only like the @Broncos so much, but #PeytonManning is still my favorite player”, maybe he won’t. Y’see, Broncos quarterback Peyton Manning is kinda like Dave. Peyton’s still famous for being in another team (he was the face of the Indianapolis Colts for over a decade) just as Dave is still talked about for having been a part of Metallica. Both team and band are based on tradition and (at least in the media) revolve around the one main man. And for this Super Bowl, at least, the Broncos are the underdogs. A stigma Megadeth have unfairly and seemingly had to deal with their entire career…

There’s only one possible band that the Dallas Cowboys would be, and that’s Kiss.

Why? They’ve been around forever, they’re over-the-top, they’re colourful, they’re as much about entertainment as they are about the game they play – i.e. they know how to put on a show. And all this is coupled with a ridiculously overblown sense of their own importance (the Cowboys’ best days are behind them too). They’re even dubbed “America’s team”. And you just know that Gene Simmons thinks of Kiss as “America’s band”. Most importantly, and maybe most telling, let’s not forget that the Dallas Cowboys already use Paul Stanley’s lone star make-up as their team logo.

Face it. Slayer would be the Oakland Raiders. A once great team that is no longer quite so great (although they still have their moments, and things are looking more promising these days than they have in a while). Lots of bark, coupled with not a huge amount of bite. Hunter S Thompson once famously said of the Oakland fans that ”The massive Raider Nation is beyond doubt the sleaziest and rudest and most sinister mob of thugs and wackos ever assembled.” And, to those outside the metal world, that’s the same sort of incorrect assumption levelled at a Slayer crowd. And Oakland fans kinda look like Slayer fans, or even Slayer themselves, if we’re honest. Seriously, just do a quick Google image search for Raiders Black Hole (the name of the hardcore fan section) and you’ll see what we mean. Oh, wait, hang on, maybe the Raiders should be Slipknot…

With Super Bowl 50 taking place in their manor, it only seems right that Bay Area boys Metallica will play San Fransisco’s AT&T Park the night before the big game (side note: why didn’t they get SB half-time show, instead of Coldplay?!). But, location notwithstanding, the 49ers have an awful lot in common with Metallica. Both were on top of their game at the tail end of the ‘80s and early ‘90s. They had some rocky moments in the 2000s, Metallica with their whole Napster palaver and the less we say about St Anger and Some Kind Of Monster the better, while the Niners were struggling with new ownership, consecutive losing seasons and a myriad of coaching changes. The millennium’s second decade started better – the 49ers reaching the Super Bowl in 2012 and Metallica headlining Glastonbury in 2014. But 2016 sees them both at a crossroads with a lot to prove. Can Metallica re-establish themselves with a belting new album after the money pits Through The Never and Orion Festival? And can the 49ers recover from an utterly disastrous 2015 season?

Steel? Iron? Metal? All the obvious signifiers are there, but that’s not where the similarities end. The Pittsburgh Steelers are one of the NFL’s oldest, most successful and reliable franchises, just as Iron Maiden are true heavy metal veterans with a parallel track record. Steve Harris and co are the ultimate blue-collar band and the Steelers are the ultimate blue-collar smash-mouth football team. While relying on an if-it-ain’t-broke-don’t-fix-it approach, both have had their wobbles – line-up changes, a few less-than-stellar seasons or albums – over their long-standing career (83 years for the Steelers, 41 for Maiden), but as winners of the most Super Bowls in history, and as one of the most celebrated metal bands, both can claim a massive worldwide fanbase.

We could go on, but, in short…

**Seattle Seahawks are Mötley Crüe
**Talented but cocky. Most hated and most loved at the same time.

**Green Bay Packers are Motörhead
**Of the people, for the people. No-nonsense authenticity.

So that’s your starter for nine… Agree? Disagree? Which band is YOUR favourite team? Let us know in the comments.