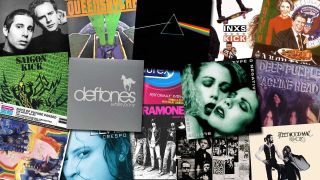 Everyone can remember what they were listening to when they lost their virginity, right? What do you mean you were 'otherwise occupied'? Thankfully, some of our favourite musicians were actually paying attention to what was playing while they were getting jiggy with it for the very first time. And we've asked them to tell us about the soundtrack to their cherry-popping…

“It was a Depeche Mode live album. It was right after it had come out and I was dating a girl who was really into them. I was into them but that album − or it could have been the sex − really made me turn the corner with them. I’ll put my hand up as a Depeche Mode fan after that one! Ha ha!”

Pink Floyd – Dark Side Of The Moon

“I remember listening to Pink Floyd Dark Side Of The Moon one time while making out with a chick. At parties and skating rinks, though, there’d be Bob Seger or The Cars playing, Bee Gees, shit like that.”

“It was a horrible experience. I was, like, 16. My mom walked in so the chick jumped off me and I’m lying there with a raging hard-on. My mom was like, ‘Koby!’ My cock just went dooowwwn. I didn’t even get to finish up – my mom made me take her to the door. Does she know me now? Oh yeah, she knows... she knows whose dick she was.sucking.”

“It might have been to Come To The Sabbat on Sacrifce by Black Widow. I was probably with some witch woman and it was probably over quite quickly too! The song goes ‘Come, come, come to the sabbat...’ so I probably came and then she came and that was the end of that and we never actually got to the sabbat! Ha ha ha! So it was either Black Widow or some pop record, I suppose, like the bloody Osmonds! Ha ha ha!”

“I nearly first had sex to Aerosmith’s Rocks… I’d been courting this girl for months, finally got in her apartment while her mom was away and she put it on. I played it over and over until she said, ‘You might as well go!’ Usually, it’s the girl’s music that you end up having sex to. So it was probably something like Rumours which was very popular with the girls back then!”

“It was Seals And Crofts, unfortunately, ha ha! I can remember the song but not the girl. I remember her mum’s cookies. And that’s why it happened because we were waiting for her mum’s cookies and I’m so fast that it just worked out perfectly.”

Ian Dury & The Blockheads – Hit Me With Your Rhythm Stick

“This is funny. I remember having my first sex. The girl was older than me: I was just a punk rock kid. She fuckin’ loved the song Hit Me With Your Rhythm Stick by Ian Dury – yes, I know that the title is totally appropriate. I didn’t really know what I was doing, but she did, because she was 18 and I was 14, ha ha! I was like, ‘Whoa, I’m in another league now!’ It was kinda weird.”

“I don’t like music during sex because music always takes my full attention away but my first girlfriend who I lost my virginity to was really into the Moody Blues. It didn’t affect my performance too much. I still stayed the opposite of soft.”

The Ramones – Rocket To Russia

“It was over fast! A good two minutes, just like a Ramones song.”

“Saigon Kick! It wasn’t a ballad, it was a song called Feel The Same Way. I probably haven’t listened to it since, but that was the tune that I had my rst 12-second sexual experience to.”

The first album I had sex to… that’s a really funny question! I remember the exact situation except for the music that was playing at the time… this is terrible because I’m envisioning the moment right now… I wanna say Deftones, because before I ‘made the deed happen’, I always remember thinking that Deftones had to be the band. I wanna say White Pony, but I could be wrong.”

Dayglo Abortions – Feed Us A Fetus

“I think I recall who my first sexual partner was… If it’s the person I’m thinking of, we used to play Scared of People over and over again. It was probably very sloppy sex, accompanied by a ludicrous Canadian punk band. That sounds about right.”

“Jizzy Gillepsie, dyslexic jazz. No, what? I had sex to Deep Purple Machine Head [Michael now acts out various sexual positions while humming to Space Truckers.] I play that record and it takes me back to that time. I just remember my dad telling me it was all gonna be OK... while we were doing it.”

“It was some kind of salsa - the cool South American stuff. This guy sings merengue, a kind of music from Puerto Rico. You’re not gonna put on Cannibal Corpse or anything. Imagine it - Entrails Ripped From A Virgin’s Cunt! Ha ha ha!”

“The one that really became the soundtrack for me and my girlfriend was Queensrÿche’s The Warning. We would just go all night long with that album spinning on the old-style automatic turntable. It would play over and over, which happened quite a bit with The Warning, ha ha ha!”