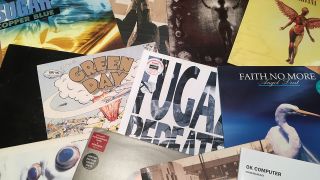 No matter which way you slice it, the 90s was a hugely important decade when it comes to the history of rock music.

Whether you spent the early part of the decade hunkering down and waiting for the grunge storm to blow over, had black and white pictures of Kurt Cobain stuck to every school folder you had, or spent 1997 onwards in parachute jeans and red-spiked hair, that one decade tipped rock music on its head and never looked back.

With so much genuinely trailblazing music made in just 10 years, when it comes to choosing the decade's best, we're asking you to answer the ultimate question: what is the greatest rock album of the 90s?

It’s a near-impossible task, but if anyone can do it, you can. We’ve listed over 200 albums to get you started, but you might have your own favourite that isn’t on there – simply write your suggestion at the bottom of the poll (please use the format Band Name: Album Title). Every vote counts – and you have three to spend on the list below.

We'll be announcing the results in the coming weeks, so make sure to check back to see how your favourite fared.