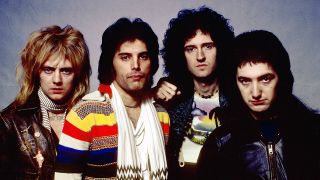 As the recent furore over the Bohemian Rhapsody movie illustrates, it's hard to overstate the impact Queen have had on rock music since they burst into life in 1970. Brilliant, flamboyant and preposterous, they lit up the 70s and 80s in a way few bands managed. They forged a sound which was unique and impossible to mimic, though went on to inspire a legion of bands in their wake. With the help of Adam Lambert, they've managed to keep up momentum and remain a juggernaut today.

But with a back catalogue almost 200 songs strong, picking Queen's crowning song is a nigh on impossible task. Well, that's where you come in. Sick of seeing Bohemian Rhapsody at the top of every single list like this, or would you fight tooth and nail to protect its rightful place as the world's eternal number one? We're handing the power over to you.

Each of Queen's 189 recorded songs are included in the list below, so scan it thoroughly and use your vote wisely. We've also left a field open for your own suggestions, in case you feel an obscure b-side – or anything else we may have overlooked – is worthy of your vote.