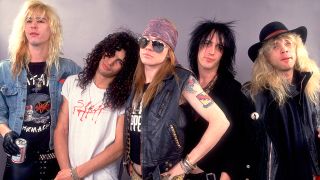 Guns N' Roses were once referred to as ‘The Most Dangerous Band In The World’. Following a career that's spanned over three decades, there isn’t a rock or metal band on the planet that hasn’t been affected by the Hollywood hard rock pioneers.

They were – and still are – the great leveller; a seminal force in rock and metal’s evolution over the past three decades. Ask any musician from any band in any genre, and they’ll pretty much all tell you how important Guns N’ Roses are to them. In terms of music, in terms of attitude, in terms of lifestyle. Thirty years on, the impact of their turbulent inception is being felt as keenly as ever.

Still, in a career that clocks in at 34 years and counting, the band's output has been pretty modest. With just six studio albums – five if you're counting Use Your Illusion I and II as two sides of the same coin; four and a half if you're not convinced "The Spaghetti Incident?" really counts – their legacy far outstrips their productivity.

But within those albums lie some of rock'n'roll's most essential songs. Feral, cocksure and aggressive, Guns N’ Roses’ best songs paint a compelling portrait of life lived without boundaries or inhibitions, a raw blast of street-level sass and ‘fuck you’ attitude. But what is the best GNR song of all time? From the anthems to the deep cuts, every fan will have their own personal favourites – which is why we're placing the final decision in your hands.

Each of Guns N' Roses' 82 officially released songs are included in the list below. We elected not to include the unreleased tracks – including the many leaked Chinese Democracy offcuts that surfaced this year – but we've left a field open for your suggestions in case you feel compelled to cast your vote there. Everyone gets three votes each, so scan the list thoroughly and make 'em count.

We'll be announcing the results in the coming weeks, so be sure to check back and see how your favourites fared.