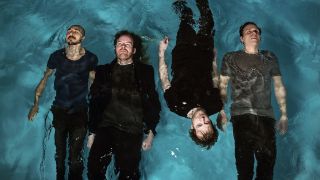 It's been quite a year for Danish prog rockers VOLA. The band have been touring hard in support of their Applause From A Distant Crowd album  - indeed they're currently on the road in the UK and have an appearance at Euroblast coming up as well.

But drummer Adam Janzi and bassist Nicolai Mogensen still found time to share with us their favourite prog albums of 2019 so far...

TOOL - Fear Inoculum
(ADAM): This album is a clear choice for one of the best albums of the year. Even ignoring the hype around this album since Tool haven’t released new music since 2006, it is still a highly anticipated album in its own right. The band proves once again that they know how to make long and complex songs interesting, leaving nothing to boredom.Besides the absolutely beautiful compositions, one thing that really captures me is the soft production of the vocals and how smooth and pleasing they are to the ear. Not one part of this experience is straining. There isn’t that much more that I actually can say about this album, it is meant to be experienced as a whole and words can’t really do it justice.

Anup Sastry - Illuminate
(ADAM): Anup is one of the most intriguing drummers and musicians out there. His most recent solo album proves that he is one of the best when it comes to creating heavy grooves coupled with a mean sound. One thing that is different from his previous solo album is that Illuminate actually has multiple different vocalists joining in on most songs on the album, where the previous album was instrumental. This obviously changes the sound a bit, but I enjoy it. Even though the drumming definitely shines, there are so many more aspects of this album that you can enjoy on top of that.

Northlane - Alien
(ADAM): Something that I’ve always associated with Northlane is a fresh sound. They always manage to take me by surprise in so many different ways, and this album is no exception. It’s clear that they’ve gone for a more electronic and sinister sound (you can hear inspiration from the likes of ‘Nine Inch Nails’) than previously, but the finesse and the mysterious vibes that are so present in their previous releases are still there on this album even though they’ve taken parts of their sound into other directions. This definitely shines through on the track Jinn.

Russian Circles - Blood Year
(ADAM): This band is one of the best out there when it comes to creating deep atmospheres in my opinion. They also manage to blend a well known rock sound with surprising progressive elements. Combining this, they manage to paint a very grainy and dark picture. This album is definitely for you if you want something emotional and moody. I hate putting labels on music, but if I had to I would call this progressive post-rock. What excites me even more is that the sound sometimes borders on black metal, which further adds to the authenticity of their sound. Everything from the songwriting to the production is meant to build up an atmosphere. This is specifically clear on the song Kohokia which is probably my favourite song from this album.

Cult Of Luna - A Dawn To Fear
(ADAM): I’m going to break the rules a bit now, since this album hasn’t come out yet. But this is an album that I am very excited about and I’m almost sure that once the album comes out (September 20th), it will definitely be one of my favourite releases of 2019, judging by the single The Silent Man. Cult Of Luna is a band from Sweden and a big part of why I enjoy their sound is because I recognise the Scandinavian sound so well. Having grown up in Sweden, I can understand where their ideas come from and that intrigues me. One thing that I can hear clearly from the single is that this album is much more raw and dark than their previous releases, which is tough to accomplish since their previous releases are already very raw and dark. The single from this album presents a cold and secluded sound that captures the essence of Swedish forests. This seems to be the perfect album to embrace autumn with this year. I’m obviously very excited for this release!

Periphery IV: HAIL STAN
(ADAM): Periphery is a band that I’ve listened to for many years and they’ve been a solid jam throughout my upbringing as a drummer. Their drummer Matt Halpern is obviously one of my major influences and idols. I’m very grateful to have had the chance of being taught some drumming by him! One thing that really captivated me the first time I heard Periphery was how they combined a playful, technical sound with something aggressive. Reckless and controlled. They’ve still had that element throughout their more recent releases, but it feels like they’ve really embraced it on a new level with their latest album Periphery IV: HAIL STAN. It’s obviously just as technically skilled as before, but something about this album feels particularly ruthless and I love it! The song Blood Eagle is probably my favorite song from that album. I just love how aggressive and mean that song is. And make sure you pay attention to the intense vocals of their vocalist Spencer Sotelo. So damn good! This is definitely one of my top 10 releases overall for this year!

Lowly – Hifalutin
(Nicolai): On their second full length album Hifalutin the danish band Lowly mixes something rather poppy with an experimental sound, that reminds me of a some of the newer releases from Radiohead – with a female lead and, in my opinion at least, a bit more inspired in terms of song writing. The blend between acoustic and electronic soundscapes seems quite fresh and unique, and thought they might not themselves identify with the term “prog”, I think their way of exploring and experimenting is more “prog” than most bands associated with the genre.

Arch Echo – You won’t believe what happened next

(Nicolai): Arch Echo has in “You won’t believe what happened next” released a refreshingly playful and unpretentious album, which at the same time is technical, precise and virtuous. It looks and sounds like they have a lot of fun making music, and we quite like that! Come and check their insane musicality out on our upcoming tour this fall!

(Adam): My fellow swedes in this band have always had the reputation of being able to create some of the most heavy and evil music out there. They certainly don’t disappoint with this album. Abyssal feels like the next evolution of their sound. It’s bigger, more ferocious, mighty and disturbing. It definitely speaks to me! This is also one of those few bands who manage to create a genuinely sinister sound that is musically technical at the same time. It is also much appreciated that the band chooses to experiment more with different ideas on the vocals on this album. It really brings something extra to their sound. I definitely recommend this album for anyone who is into heavier music!