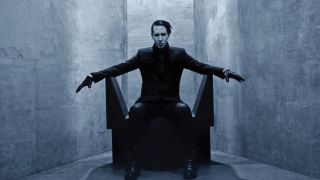 Marilyn Manson is releasing his ninth album The Pale Emperor on Monday 19th January and we’re streaming for FREE for you all now. And because we bloody love it, we thought it right to go through each of the ten tracks in more detail.

You can listen to The Pale Emperor in full here.

A swinging and bluesy number that’s wrapped around a lush fuzz bass and a seductive and enrapturing Manson vocal. It’s sinister, sultry and sexy (and probably loads of other words that don’t start with S) and sets a tone for the album. With a legacy of opening albums in a more low key manner with moments like Great Big White World, Godeatgod and the criminally underrated If I Was Your Vampire, it won’t come as a shock to the system that you’re not blasted with molten metal straight off the bat. The “we got guns, motherfuckers better run” hook is huge, it’s trippy and seedy in equal measures and it is a stunning yet understated open to the record.

Having been used to open Manson’s trio of Californian shows at the tail end of last year, this is motored by a driving industrial beat and the first showing of how huge Manson’s band can be when firing on all cylinders. It’s a straight up rock and roller, soaked in whiskey and dripping with swag, and a track that won’t be dislodged from the setlist for years to come. Think I Want To Disappear with all of the ‘90s effects replaced by a confident, bold Manson playing ringleader to an altogether darker feel that’s all lust and sex. It’s hard not to get too fanboy about Manson’s vocal performance thus far because it’s so commandeering and reminiscent of the power he holds at his magnificent best. The recent Roxy show threatened a comeback and this feels like the real deal.

Grinding and filthy, that bluesy feel from Killing Strangers is back. Chosen as the track to first debut to the world, it’s a sterling choice for giving you an idea of where this album lives. Slow in pace and sinful as a whore wanking in church, the guitar work is subtle and has rung out chords that give the strip club sensuality a twist of desert cool. Again, the beat is important here. Rarely changing, it’s simplicity allows Manson’s character take the lead and bring it home. You’ll have noticed that there are a lot of sexual descriptions but that’s what the music warrants. Seriously. You’ll need a shower after this.

The Mephistopheles Of Los Angeles

Delicate notes and strums give way to a stomp similar to his take on Personal Jesus. Tyler Bates has also brought in a different style of guitar playing that we haven’t heard on Manson albums before. It’s rarely bombastic but always powerful and serving the track appropriately and there’s a hell of a lot of the blues in there. Manson’s lyrics here seem cathartic and carving himself in uncharacteristic fashion. Couplets like “I don’t know if I can open up/I’ve been opened enough” and “I’m ready to meet my maker” are not the kind of cut and dried and offering himself up for the world to see that we are used to with The God Fuck. For a song that offers “I’m the Mephistopheles of Los Angeles”, it’s done in a way that feels more introspective and self-loathing than the all conquering The Reflecting God.

Minimalist keyboards and gentle bass guitar with a delicate Manson croon are the order of the day – the guitars are restrained and tasteful and it becomes apparent that this isn’t what you would traditionally call a metal album. It’s heavy in it’s own way and it’s powerful but tracks like this, shrouded in intrigue, mystery and a filthy elegance, are very much at the fore of The Pale Emperor. Nearly six minutes in length, it keeps you on the edge of your seat throughout as it builds around (you got it) sexual sounds and lyrics. There’s no way around it, this is a sex album.

Slave Only Dreams To Be King

Propelled by a stuttering beat that feels like a colossus limping, this album’s tracks are all similar in their pacing and overall feel up to this point with each track having a slight shift in mood more than radical shifts in styling. SODTBK sees Manson’s vocals being a little more hysterical and like the better moments on Born Villain. The guitars are more upfront and powerful but without ever deviating from their role of repetition and providing a more basic yet highly engaging pedestal for Manson to get on. It’s not as dynamic and impactful as what has come before it but it’s still on point.

The Devil Beneath My Feet

With a ‘70s strut and slight psychedelic guitar flares that really stand out alongside a fuzzed up and deviant Twiggy Ramirez bassline. It’s got an oddly Mechanical Animals feel to it, those guitar lines exploding with excess and elegantly wasted gasconade. “It’s better to be blamed for robbing Peter than guilty for paying Paul” is also one of the coolest lyrics in Manson’s arsenal and that’s some going.

Opening with menacing blasts of synths that are the industrial metal equivalent of the foghorn blasts in The Lord Of The Rings, this has a very similar feel in pace and bassline to The Dope Show if not in melody. This is Manson in artier waters, it’s an unconventional and challenging vocal with menacing undertones. Again, the feel is all laid-back cool and bluesy shuffles. Not a standout track by any means.

Already thrown into the live mix, this is a rattling, shimmying track that features one of the album’s best vocals. Alive with character and killer lines like “you’d better pray for hell, not hallelujah”, it’s a good example of Manson’s rebirth. It’s not about repeating the past, it’s about a bold new direction that fits Manson’s newly found confidence. With everything being so musically basic, the impetus is on Manson to deliver a performance that enraptures and engages and that’s exactly what it is. This song is so dark and sexy that it sounds like the kind of jam that the snake would have used to charm Eve in the Garden of Eden. Superb stuff.

Odds Of Even Final

Saving the longest track for last, this is six and a half minutes of trippy instrumentation, interesting additional synths and shimmers and another killer restrained and vocal from Manson. His ability to really build a track patiently stands out here, it’s all restraint and moody angsty slugging and not the white hot rage we are used to from him. It’s much in keeping with Born Villain, in that respects, just to a heightened level of quality. It’s a different kind of Manson record and it should be during the latter stages of his career, it’s not trying to recapture the sounds of yesteryear but there’s more than enough villainous menace for it to not be off-putting to long-term fans. Put simply, it’s the best Manson album in a decade and if you’ve ever had even the most fleeting of interests in the man and his work, this is definitely worth checking out.

Listen to The Pale Emperor in its entirety here.