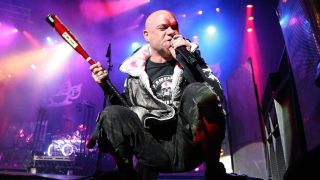 Five Finger Death Punch are one of modern metal’s success stories. The prolific Las Vegas band have released six albums since their inception in 2005, a heroic pace by today’s standards. Their work ethic has paid off, propelling them from undercard hopefuls to arena-filling headliners. Sure, their low-slung bludgeon and air of machismo has drawn some fire, but the figures speak for themselves: their most recent album, Got Your Six, peaked at No.2 in the US, something that makes them the envy of many of their contemporaries. And here are the 10 tracks that got them where they are.

5FDP’s second album, 2009’s War Is The Answer, was a game-changer, debuting at No.7 in the US charts. It was also their first collaboration with producer Kevin Churko, who coaxed a thrash-powered shelling out of the band, especially on Dying Breed – a song originally recorded as a bonus track, until the band heard the finished article and instantly promoted it album opener.

The title track from their 2015 album references a military metaphor for protecting your brother’s back — a nod to their support of the armed forces as well as a rallying cry among the musicians to draw closer in the face of adversity – something 5FDP aren’t strangers to. Propelled by drummer Jeremy Spencer’s marauding, behind-the-beat attack, Got Your Six begs to be played at neighbor-vexing volumes.

A dizzying blitz of rhythmic bombardment, this track from The Wrong Side Of Heaven And The Righteous Side Of Hell (Vol. 1) has installed itself as a fan favourite in their live shows, with vocalist Ivan Moody unleashing his cavernous roar above the dual-fretted chug of guitarists Zoltan Bathory and Jason Hook. Guaranteed pit-opener.

The band’s self-produced 2007 debut, The Way Of The Fist, contains some of their strongest material, not least the bludgeoning title track. A showcase for Zoltan Bathory’s unique style, this was one of the tracks that caught the attention of not just festival audiences, but bands like Korn and Disturbed, who offered the band critical support slots in their early days.

He may be best known for his gasoline-soaked roar, but Ivan Moody boasts an impressive range that allows him to switch between feral growls and piercing clean vocals and this mid-tempo monster includes generous doses of both, along with audience-friendly singalong lyrics and Jason Hook’s cartwheeling fretboard dynamics.

The fourth single from 2011’s American Capitalist sidestepped the band’s combative lyrical stance to confront the dark and violent realities of bullying and teen suicide in the age of social media. One of Moody’s finest lyrical moments, Coming Down served up a deeply-emotive and catchy-as-fuck chorus, with vibrant melodies, lush background vocals and plenty of wall-trembling riffs.

4. Under And Over It

With its absurdly-hooky, alt-metal grooving and Moody’s steroidal snarl, the band took on all of the trolls, rumour-mongers and puffy-chested keyboard warriors with American Capitalist’s slamming first single. A pummeling showcase of the taut muscularity of the band’s rhythm section, the track also inspired a big budget music video – something that you don’t see so often these days.

Nearly every 5FDP show closes with this unapologetically sentimental, mid-tempo belter from Way Of The Fist. Written in the wake of Moody’s split from both his then-fiancee and his old band, Motograter, The Bleeding established the singer’s fearless vulnerability. It still sounds as polished, infectious and mature as any of the band’s subsequent output, with its ginormous, arm-around-your-mate chorus and a heart-ripping solo by Steelheart guitarist Uros Raskovski.

What’s not to love about this full-throttle headbanger from The Wrong Side of Heaven and the Righteous Side of Hell (Vol. 1)? It’s all there — the two guitarists’ bludgeoning low-end chug, the bouncy Pantera-flavoured tempo, Moody’s vitriolic, “come-at-me” delivery and a horn-throwing guest turn from Rob Halford in the second verse. While 5FDP’s catalog boasts a raft of catchy ballads and mid-tempo favourites, they made their bones with the heavy stuff and this is one of their best.

Live, Moody often introduces this song with the lyric, ‘I’m taking back control…’, whipping the legions into a frenzy. Buried in the middle of their debut album, White Knuckles emerged as a surprise hit with its propulsive attack and mountain-cracking breakdown. Explosive, cathartic and impossibly-addictive, by the end of this song in their live set, the entire venue looks like a sprawling, windswept field of fists and horns.

The Top 10 Best Metallica Songs Of The 90s

The 10 Best Babymetal Songs Of All Time