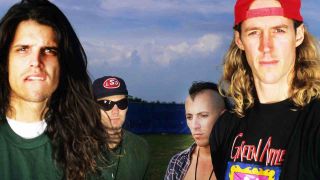 “When we got signed [by Zoo Records in 1992], the most important thing for us was to have creative control,” Tool guitarist and art director Adam Jones emphasised in a 2008 interview with Revolver. “We went, ‘OK, if we take less money can we have control of the music?’ And the label went, ‘Yeah, no problem!’ And we said, ‘If we take even less money can we have final say over the videos.’ And they went, ‘Sure.’”

At the time, Adam was working in Hollywood on set design, make-up and special effects for big-budget movies, including Terminator 2: Judgment Day and Jurassic Park. He wanted to be able to use his moviemaking acumen to create strange, imaginative clips that were more like short films than conventional music videos.

The stop-motion animation in the band’s weird and wonderful second video, Sober, turned many MTV viewers on to Tool, but it was the even more unsettling follow-up, Prison Sex, that truly showcased Adam’s cinematic skills. But the creation of the clip was far from effortless. When people from Zoo first saw the treatment, they asked Adam not to make another thematic stop-motion video, especially if it didn’t star the bandmembers.

“There was a lot of banging heads with the record company, because they still wanted to do things in the traditional way,” Adam said. “They’d go, ‘Well, if you’re not gonna be in your video, we’re not gonna pay for it.’ And we’d say, ‘What do you mean? We’re supposed to have creative control.’ It was typical, slimy shit, but in the end they gave in.”

Frontman Maynard James Keenan wrote Prison Sex about the tragic cycle of domestic abuse; people who are sexually molested when they’re young are far more likely to become abusers themselves later in life than those who were never abused. In the first verse, Maynard sings, ‘I’ve got my hands bound, and my head down and my eyes closed / And my throat’s wide open’, introducing the topic in no uncertain terms. In the lines after the bridge, the victim becomes the assailant: ‘I have found some kind of temporary sanity in this / Shit, blood, and cum on my hands / I’ve come round full circle.’

Adam, who directed the Prison Sex video, captured the menacing and horrific tone of Maynard’s lyrics by using dark visual metaphors about being physically and mentally dismantled and then abandoned. The clip contained no graphic violence or sex. Instead, the stop-motion animation used monstrous creatures, which wouldn’t be out of place in a Tim Burton film, to convey manipulation, confinement, abuse and hopelessness.

The Prison Sex video features a sinuous, sadistic female black leather creature that taunts, terrorises and maims a legless marble robot she keeps in a cement drawer. At one point in the video, the robot sees a wasp buzzing around and traps it in a bottle, suggesting that he, too, is now capable of cruelty.

Adam started working on the Prison Sex video with Fred Stuhr, who directed Sober. They began shooting in January 1994, and as they exhaustively created footage frame by frame to match the music of the song, they found themselves faced with a situation even more unnerving than their impending deadline.

“We were still there at three in the morning when the ’94 earthquake [magnitude 6.7, which killed more than 60 people and injured more than 9,000] hit Los Angeles,” Adam recalled. “We were on the second floor of this old brick building that used to be owned by [American filmmaker] Cecil B. DeMille, and it wasn’t too sturdy. The rooms started shaking, and before I even know what was going on, Fred ran over to stand in the doorway, because that’s what you’re supposed to do in an earthquake. But the other five of us who were there just ran out and ploughed him over and left him lying on the ground. It was the worst thing that’s ever happened to me, and the best thing. When I looked out I could see downtown Hollywood, and all the transformers were blowing. They were popping, so there were these lightning strikes everywhere and it looked like the city was being bombed. It was just so beautiful.”

When the aftershocks stopped, Adam returned to the studio to finish the shoot. Then he called his friend, video director and Failure frontman Ken Andrews, and asked him to help edit the video.

“I was familiar with the song already, so I knew what it was about,” Ken says. “I’d also visited Adam at the set, so I knew what the puppets looked like and I knew it was going to be pretty heavy.”

The footage was all transferred to tape, then Adam met Ken at his home in nearby Woodland Hills, California. The two planned to spend a couple days editing on a rented AVID machine. Of course, they hadn’t anticipated the resulting delays.

“Everything was set up, so I asked Adam what the first shot was,” Ken recalled. “He had one of my guitars and was playing it, so I grabbed a guitar. All of a sudden two days of guitar playing passed and no editing got done. Eventually he said, ‘Shit, we’re running out of time.’ So the last three days of actual work were a bit of a mad scramble.”

Once Adam and Ken started editing, the process was smooth, the results were outstanding and the pair made their deadline and submitted the clip to the record label.

The Prison Sex video was widely praised for its artistry and innovation, and received an MTV Music Video Awards nomination for Best Visual Effects. Ironically, the channel banned the clip after just a few plays, due to the station’s standards and practices department deeming it to be too unsettling even though it contained no blood or nudity.

Despite the resulting lack of airplay, being banned by MTV was a feather in Tool’s cap.

“Part of their whole thing has been to do everything different, and they don’t follow the rules, especially the rules of the music industry,” Ken says. “Pretty early on, they gave off a healthy dose of cynicism and they had their troubles with the industry from day one. They’ve never played nice when it comes to record label stuff and business stuff. They’ve always been very independent.”