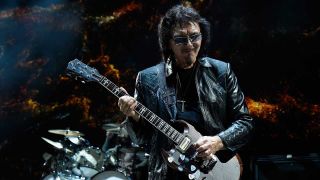 When we recently drew up a list of the Top 50 Greatest Riffs Ever, there was only ever going to be one winner: Black Sabbath’s mighty Symptom Of The Universe. We asked the man behind it, the legend that is Tony Iommi, how he created this immortal noise – and whether he’s ever come up with a riff on the toilet.

Can you remember where you were when you came up with the riff for Symptom Of The Universe?

Tony Iommi: “Oh my god, it was a long time ago. I can’t remember, to be completely truthful. I imagine we would have probably been in rehearsal.”

Is that how you used to come up with riffs – in rehearsal?

“Generally, yeah. Sometimes I’ve come up with stuff at home and taped it just to remember it, but I don’t really work things out as such.”

You make it sound easy…

“Dare I say it, but yeah, I’ve not had much trouble coming up with riffs. Now I’ve said it, I’ll probably never come up with another one. But I’ve got hundreds of them from over the years on various CDs. Some of them go back to the original Sabbath, some from the Dio era, bits and bobs from when [Deep Purple’s] Ian Gillan or [former vocalist] Tony Martin were in the band. I don’t even know what’s on there. I keep threatening to sit down and listen to them all one of these days when I get the chance.”

Back when you were writing Symptom Of The Universe, which guitarists were you in competition with?

“Me. I was in competition with myself. I would always try to come up with more and more inventive ideas – different tunings, changing the amps, just fiddling about with the guitars really. I would constantly be trying to improve things and change things. I didn’t really listen to other people, just in case I started playing someone else’s riff by mistake.”

The second half of Symptom Of The Universe heads off into weird, prog-jazz territory. Was that you deliberately setting out to write a prog-metal song?

“No, that was just us jamming together. It was something I came up with and Geezer [Butler, bass] and Bill [Ward, drums] followed, and then Ozzy came in. But then a lot of Sabbath’s stuff went to places you didn’t think they would go. I remember when we had Ronnie Dio with us, I played him the track Die Young [which ended up on Sabbath’s Heaven And Hell album]. It went into this completely different tempo, and he went, ‘You can’t do that!’ I went, ‘Of course we can. It’s what we’ve always done.’”

What are your memories of making the Sabotage album?

“Oh, it was a nightmare. We had a court case with our ex-manager, Patrick Meehan, while we were in the middle of making the album. We’d get a writ and we’d end up having to go into bloody court in the morning, all dressed up, then try to get back to the studio afterwards to carry on working. It was hard to come up with things. You had to have two heads.”

Did that aggro feed into the album?

“Certainly with Geezer’s lyrics. He wrote one called The Writ, so it influenced him, that’s for sure. I think the aggression definitely came out in the music when we played together. There is some really heavy stuff on that record.”

Is it true that The Writ was inspired by a lawyer unexpectedly turning up at the studio to serve you with legal papers?

“That’s exactly what happened. They used to turn up all the bloody time. We never knew they were coming. If we did, we’d have disappeared sharpish.”

Sabotage took nearly a year to record. Was there ever a point where you thought you might not make it to the end?

“No, I’ve never felt like that. We’ve always fought through whatever was there. Without the music, we’d have all gone bloody loony. I think it actually it brought us all together as a band. Whenever we went through problems, we’d just fight through it together.”

The Sabotage album cover. What’s going on there?

“Ha ha ha! A guy who worked for us who was an artist, he came up with a great idea – us reflected in a mirror, stuff like that. But when it got to the day, somebody said to Bill, ‘What are you gonna wear?’ And he was, like, ‘I dunno.’ So he turned to his wife and said, ‘Can I borrow your tights?’ So he put on this pair of his wife’s red tights. And I think he might have borrowed Ozzy’s underpants, too. It looked bloody ridiculous. It definitely didn’t come out like we wanted it to.”

When was the last time you came up with a riff and thought, ‘Ooh, that’s a bit tasty’?

“Well, I’ve got a few that I haven’t used yet that were good. There’s about four or five from the last Sabbath album [13] I that we didn’t use. I listened to a CD with them on recently. I thought, ‘Blimey, that’s good, why didn’t we use it?’”

What are you going to do with all these unused riffs that you have lying around? Use them on a solo album? Or maybe Save them for a new Sabbath album?

“It won’t be a Sabbath album, I don’t think. I really don’t know. I’ve just had [engineer] Mike Exeter over to my house, and we put some ideas down, though. I’m getting dates off Mike to see when he’s available, but really it’s down to me to go through some of the things I’ve already got. Problem is, by the time I’ve gone through them, I’ll have come up with something else.”

We’ve talked about Symptom Of The Universe. But what’s your favourite Tony Iommi riff?

“Oh my god, that’s difficult. I like Into The Void. And I like some of the stuff we did with Dio – Heaven And Hell was a good riff, Neon Knights. There’s so many I like. I like pretty much all the stuff we’ve done.”

Apart from your own, what’s the greatest riff of all time?

“That’s even harder. There’s so many great riffs out there from the past, and up to date stuff. But you’ve got to have Deep Purple’s Smoke On The Water. And of course there are a lot of Zeppelin songs. Jimmy Page has some great riffs.”

Have you ever had a riff come into your head while you’ve been sitting on the toilet?

“Ha ha! Oh yeah. I have riffs that come in all the time at different times, different places. You never know when the magic’s going to strike.”