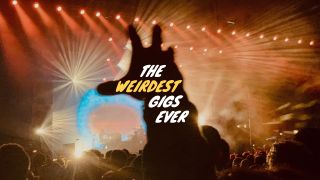 You're under lockdown. Confined to your house or maybe even your room-in-a-house. Some of your favourite activities – going to the pub, watching bands – are verboten. And now there's a load of gigs to watch via Facebook Live. Weird, huh?

No. It's not weird, it's creative. You want weird? Here are some of rock’s weirdest gigs:

In 2014 Metallica played a desolate and hostile land populated by strange creatures: a land without laws, where the weather is your enemy, none of the people are local and everyone wears ridiculous furry hats. But forget about Glastonbury.

In December 2013 Metallica became the first band to play on all seven of the world continents with a gig in Antarctica for a small group of fans and research scientists inside a translucent dome on a helipad. The audience listened via wireless headphones to protect the lickle ears of the penguins. Elbow fans from Glasto, meanwhile, are still trying to staunch the bleeding.

2. Unfathomable Ruination get locked in a box

Locking death metal band Unfathomable Ruination in a sound-proof air-tight metal cube and getting them to play until their oxygen ran out was a BRILLIANT idea and if João has any spare time on his hands during the pandemic, we can think of a few more bands to do it to.

“Somebody told me you people are crazy! But I’m not so sure about that – you seem to be all right to me!” In 1978, psychobilly legends the Cramps played a gig at Californian psychiatric hospital Napa State Hospital. If João Onofre (see above) had been involved it would have been packaged as a clever commentary on mental illness – a treatise, if you will, on the staged psychosis of the band and the genuine mania of the audience and BBC4 would've commissioned a new episode of Arena about it.

But they didn't. Because it's punk rock and it was just a mad band playing another mad gig to yet another mad audience.

4. Foo Fighters play homoerotic country. To some idiots. From a truck.

In September 2011, those fun-loving party-starters from the Westboro Baptist ‘Church’ decided to picket a Kansas City gig by the nicest men in rock after the Foo Fighters’ comedy video Hot Buns set off old man Phelps’ “hot man muffins” Google alert the month before. Overheard shouting “But I can barely get a WANK out of this!”, Phelps did the only thing that made sense: sent his backwards offspring to picket the Foos’ gig armed with placards saying “Thank God For Dead Soldiers” and “Soldiers Die 4 Fag Marriage” and other philosophically questionable and frankly mental things.

So the Foo Fighters dressed up as a gang of good ol’ boys, pulled up alongside them in a flatbed and sang a song of gay love straight into their uncomprehending faces. Fred Phelps died not long after. The two events may be unconnected.

In 2007, aware that their album title Icky Thump was a rubbish mis-spelling of some old English phrase, Michigan’s Jack and Meg White dressed up as cockney Pearly Kings and Queens for the new White Stripes album cover and then played an acoustic set for the Chelsea Pensioners.

‘Ecky thump’ is a Lancashire saying. Only 250 miles out, Jack.

Rumours that one Chelsea pensioner was later heard commenting, “Bleedin’ nora – that geezer’s voice! Sounded like someone strangling a Postman Pat. Even Arnhem sounded better than that. I feel a bit Pat and Mick…” are just malicious and made up by me, just then.

In 1994, the Manic Street Preachers’ performance of Faster on Top Of The Pops – with singer James Dean Bradfield in the kind of black balaclava favoured by the IRA – drew a record number of complaints to the BBC (over 25,000).

In 2010 they followed that up with a performance so subversively boring that it went completely unnoticed to 99% of the viewers of Strictly Come Dancing, with only one viewer, Daphne McDonald (@daphneswingshard), bothering to tweet: “Just back from filling up the kettle. Who were the fat waiters? #heymacarena”.

7. Brian May plays ‘God Save The Queen’ on the roof of Buckingham Palace

Back in 2014, with Lemmy suffering from ill-health, Motörhead decided to launch their own cruise, “the loudest boat in the world”, the Motörboat. Travelling from Miami to Mexico, with a boatload of metal maniacs playing each night, including Anthrax, Down, Testament and more, activities included Black Sabbath Yoga, Beer and Bingo sessions run by the bands, a Belly Flop contest judged by members of Megadeth and an impromptu 2am gig to celebrate Johnny Tempesta’s 50th that basically kicked off what was to become Metal Allegiance.

We went and said it was like "Hard Rock Hell with hot tubs, on the high seas, with a hard-on", noting: 'Metalheads + sun + hot tubs + buckets of beers and tequila = cod lesbian tit-licking selfies and high-fiving husbands. I tried not to look but the alternative was watching Kill Devil Hill."

9. Metal band The Defiled launch album on an iceberg

Daft herbal boozefiends Jägermeister were the people behind this publicity stunt which saw much-vaunted Brit metal band The Defiled play a gig on an iceberg off the coast of Greenland.

“I’ve never been surrounded by the prospect of death so much!” said Defiled synth wizard The AvD. “You can fall in the sea, get hit by some ice, pass out, get eaten by a polar bear, an iceberg cuts your boat in half… Every step of the way our guide had something to say about how we might die at any minute!” In the end it was something far less exciting and more depressing that led to the band's demise: financial pressures.

10. Obligatory mention of The Beatles playing on a roof

Oh yeah: the Beatles played on a roof. You probably already know that because Boomers haven't shut up about it, or how good the 60s were, since.