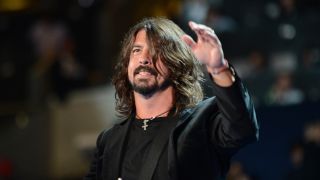 The 16 days Dave Grohl spent in Sound City studios in 1991, recording Nevermind with Nirvana, changed his life. A converted factory in the Los Angeles suburb of Van Nuys, Sound City was one of America's most renowned studios by the time Nirvana arrived - everyone from Neil Young to Fleetwood Mac to Ratt had recorded their breakthrough albums on its Neve console. Such was Grohl's affinity for the place that its closure in 2011 prompted him to start work on a documentary film, Sound City: Real To Reel, charting the studio’s history and music’s changing relationship with technology. “The goal was to inspire the next generation of musicians to fall in love with music like we did,” says Grohl.

Why did you want to make a film about Sound City?

I wouldn’t be who I am right now if it weren’t for Sound City. I think of that Neve board not as a part of my history, but as part of me. What a lot of people don’t take into consideration is the importance of the room where something was recorded, or the console on which it was recorded. If it weren’t for that board, I might not be here.

Then there’s the discussion of technology and the human element. I mean, why did I fall in love with John Bonham? Because of his feel, because of the way he sped up or slowed down, because of his imperfections. Keith Moon, Stewart Copeland, all of these legendary drummers were wild, and that’s what was so inspiring. Nobody’s made the movie about how technology has affected the way we listen to and hear music.

How did you decide who to interview for the film?

I said to the people at Sound City: “Give me a list of every record that was made at the studio”. They stared at me and said: “That’s impossible. There were a million records made here”. So I said: “Okay, give me a short list of big ones”. And I started calling everyone from Rick Springfield and Rick Nielsen to Neil Young and Tom Petty. Because of what Sound City represented, every single one of those people wanted to be in the movie. I didn’t have to beg anybody.

Ratt feature in the film. Some people might be surprised at the thought of you interviewing them.

I think they were surprised too [laughs]. They made _Out Of The Cellar at Sound City, and it’s an iconic album – there were hits_ on that record. When the guy from Nirvana calls someone from a metal band from the 80s, there’s a minute or two of sideways glances. It’s like two cowboys stepping out of a bar, gunslingers ready for a shoot-out. But anybody that knows me knows that I can sit down and have a pint with anybody. Music is music. I don’t believe in guilty pleasures. So when I asked the Ratt guys, they were like: “Are you kidding? Are you sure?”. I’m like: “C’mon, you made that huge record at Sound City. Let’s go!”. And they were fucking awesome.

Is there anyone you wanted to interview but couldn’t?

Ronnie James Dio. Holy Diver was such a good record, man. And that fucking drum sound, man… Aarggh! Sadly he passed away, but I got Vinnie [Appice, Dio drummer] in the film.

The soundtrack album features you and the Foo Fighters playing with guests including Trent Reznor, Stevie Nicks and, surprisingly, Paul McCartney. What’s the connection there?

There’s a rumour that The Beatles rehearsed in that room before their Hollywood Bowl gig in the mid-60s. This film isn’t just about Sound City, it’s not just about technology or the human element, it’s also an intensely personal story for me. The reason I’m a musician is because I fell in love with The Beatles. So for me to be playing with the person who is responsible for me being here right now was about the most profound, full-circle moment of my entire life.

Can you remember why Nirvana chose to record Nevermind at Sound City in the first place?

Butch Vig [producer] said: “There’s a place that has a Neve board, and it’s super-cheap”. Basically, we went there because it was cheap.

What was your initial impression of the place?

When we recorded the first song [In Bloom], we plugged in, sat down, recorded the first couple of takes and went into the control room to listen to playback. Butch hit ‘play’, and it was unlike anything we’d ever heard. It was Nirvana, but the biggest, baddest, punchiest version of Nirvana we’d ever heard. It was just like, “Oh my God! How did that happen?”. It was that room and that board.

You’re busy with the film. Where does that leave the Foos?

Foos are going to take a break from being the Foo Fighters. It’s funny, we were telling everyone we were on a hiatus, but Pat Smear calls it an “Ihateus” [laughs].

You did find time to play drums on the new Queens Of The Stone Age album, though.

Yeah. And I’m very excited for the world to hear it. Six years is too long to go without a Queens Of The Stone Age record. It’s almost like children in a house when the parents are away.

You’ve said that you consider Sound City: Real To Reel to be your life’s most important work. Why?

I’ve selfishly been making music for myself, and my band, for 20 years. The Sound City movie’s not like that. The Sound City movie is for other people. I’m not doing it so that other people will think I’m the greatest fucking director in the world; I don’t know what I’m doing. This movie is for you. This is for your kids. This is for people in a band who’ve never fuckin’ walked into a recording studio.

Do you have plans to do any more directing?

I wouldn’t necessarily say I have the bug, but I do like to tell a good story. We’ll leave it at that.

This was published in Classic Rock issue 181.