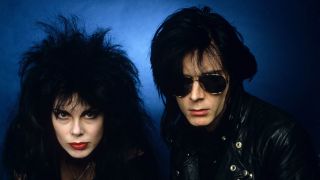 Goth is the musical movement that never actually existed, outside of a few people’s fertile imagination and the need for a blanket term to wrap like a cloak around all the different bands they liked. All the major bands connected to the goth scene – Bauhaus, Siouxsie, The Cure, even The Mission’s Wayne Hussey – have all disputed the use of the ‘goth’ tag to describe their music.

So the music in this top ten is made up of ‘classic’ goth – ie, music that is unarguably gothic. And, remember, it’s goth because the goths say it is…

One of the albums that defined goth. Bassist Steve Severin later revealed that the album’s schlocky horror show themes – present in songs such as Voodoo Dolly, Halloween and Nightshift – were inspired by The Cramps and were meant to be tongue in cheek. Almost no one took them that way at the time, and instead wallowed in the Banshees’ best album. Into The Light, Spellbound and Sin In My Heart rocked, while Nightshift and Arabian Knights slinked seductively, with Siouxsie earning her stripes as the goth pin-up/dominatrix. Soon all goth girls would look that way.

First there was Southern Death Cult, then Death Cult and then… this. Ian Astbury and Billy Duffy pulled off a genre-defining debut – the design of the sleeve, the Native American references, the ballsy live shows (and early copies of Dreamtime came with an excellent free live album), all made The Cult the perfect gothic rock band. Spiritwalker sent a thousand indie discos into chicken-dancing frenzies, while A Flower In The Desert is the forgotten gem. Arguably the band got better – slicker, finding their place at the ‘rock’ end of the goth-rock spectrum – but The Cult were never again as original or important as on Dreamtime.

Bat cave regulars Flesh For Lulu brought a warmer rock sound to goth – not for them those archetypal doomy vocals or that goth-trademark crisp, icy guitar sound – and this is their only album that could truly be considered goth. Instead they covered the Stones’ Jigsaw Puzzle, got black backing singers to give Restless some soul to add to its foot-on-the-monitor swagger, and wrote a storming goth anthem in Subterraneans. Then, just to confuse their audience further, they added the black-hearted country of closer Heavy Angel.

Even at the height of punk, singer Dave Vanian – a former grave digger – was dressing like a vampire, so with at least part of the look in place it was no surprise when gothic elements started creeping into The Damned’s music in the mid-1980s. With Captain Sensible off following a solo ‘career’, Dave’s influence took over and the band delivered this commercially successful album. From Rat Scabies’s powerhouse drumming on the opener Street Of Dreams to Vanian’s lush crooning on Shadow Of Love, and the comic hero-inspired tale of Grimly Fiendish, Phantasmagoria is gothic pop at its very best.

A Sisters Of Mercy splinter group (Wayne Hussey, guitar/vocals, and Craig Adams, bass, with Artery guitarist Simon Hinkler and Red Lorry Yellow Lorry drummer Mick Brown), The Mission had an audience ready and waiting. Their first two singles, Serpent’s Kiss and Garden Of Delight, displayed a camper, more accessible take on the Sisters’ sepulchural rock. God’s Own Medicine hammed up the goth elements, added layers of chiming 12-strings and, on songs like the (otherwise lovely) Love Me To Death, lyrics that could’ve been written by Dick Emery: ‘Love comes gushing/Love runs free/My love comes all over you’.

The Cure were punks (or post-punks), Robert Smith’s whining vocals recalling Buzzcock Pete Shelley, but a trio of dark and intense albums – Faith, Seventeen Seconds and Pornography – and Smith’s second job as guitarist for Siouxsie & The Banshees meant that his band were adopted by the goths. Standing On A Beach LP/cassette (the CD version was called Staring At The Sea) is a collection of singles and shows the band at their most accessible, with their infectious pop (The Lovecats, Let’s Go To Bed), complementing their dark side (A Forest, 10.15 Saturday Night, etc).

The Sisters’ rep was carved through their early 12-inchers – classics like Alice and Temple Of Love – and their debut album, 1985’s First And Last And Always, was arguably more important to goth than Floodland, which came as the ‘movement’ fizzled out. But this is undoubtedly their finest moment – the album that fully realised Andrew Eldritch’s grand vision. From the hymn-like opening of Dominion/Mother Russia to the dark doom of This Corrosion, and with two songs produced by Bat Out Of Hell writer Jim Steinman, Floodland was the epic sound of the Sisters dancing on the bones of the 80s.

In love with obscure 50s rock’n’roll and schlocky B-movie horror flicks, The Cramps plundered the material of their rockabilly heroes, and delivered their own twist on choice cuts such as Goo Goo Muck, Surfin’ Bird and an amped-up take on Hazel Adkins’s already mental She Said. Melancholy standards Lonesome Town and Fever became just plain spooky, while goth pin-up guitarist Poison Ivy nicked classic riffs to add to Lux Interior’s unhinged lyrics about garbage men and human flies. The result was captured on this best-of their early stuff: trashy, stompin’ psychobilly with a shit-eating grin and a hand on yer zipper.

Probably the first ever truly gothic band, Bauhaus – like all the bands on these pages – hated the term being applied to them. Understandable, really. Bauhaus pioneered the sounds, images, lyrical themes and fashions that a legion of other bands turned into clichés after them. This singles collection brings together all their best moments – including their epic first release Bela Lugosi’s Dead (never before included on an album), dark 80s pop classics such as She’s In Parties, the unsettling The Passion of Lovers, the wired cover of Bowie’s Ziggy Stardust, and possibly the only funky goth track, Kick In The Eye.

A best-of that follows the Cocteaus from their earliest incarnation as sub-Siouxsie wannabes to being one of the most original and inspiring bands of the period, this is a great place to start for the uninitiated. Elizabeth Fraser confirms herself as easily the finest singer of her generation – cooing, soaring, soothing, with an ecstatic voice that sounds permanently on the verge of orgasm, while Robin Guthrie is a much underrated guitarist (in his use of textures and effects he was an influence on – and unlikely friend of – Jane’s Addiction’s Dave Navarro). Includes most of the favourites from Lazy Calm to Iceblink Luck.

For more goth horror and the fall and rise of The Fields Of The Nephilim, then click on the link below.

How The Fields Of The Nephilim Had The Last Laugh