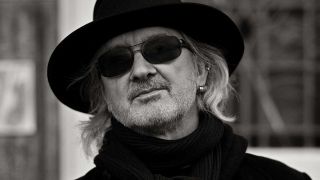 As one of the architects of goth, The Mission’s Wayne Hussey has earned the right to wear sunglasses at any time of the day. But that’s not the only reason he’s sporting shades when we meet in a pub on the outskirts of his childhood home town of Bristol in the middle of the afternoon.

“Prescription,” he explains. “My eyesight’s always been poor. They look better than regular specs.”

Hussey focused his peepers long enough to write Salad Daze, a hugely entertaining autobiography which charts his journey from clean-cut Mormon kid to wayward member of a pre-pop Dead Or Alive and an emergent Sisters Of Mercy, although he cuts off just before the last-days-of-Rome hedonism of The Mission. “That’s for part two,” he says.

Why did you decide to write a book now?

Age was a factor – I was approaching sixty. Plus I got to a point where I had made a lot of records with The Mission and on my own over a short period of time, and I felt creatively exhausted. It was, like: “Okay, what can I do now?” Plus people had been on at me for years to write a book; when you get drunk you tell some great stories.

The book does make being a musician look like massive fun.

That’s the thing about being in a band, it is fun. The situations you find yourself in are funny and ridiculous.

You were raised a Mormon. Ever wonder how different things could have been?

I started to question religion as a whole in my teens and I was in and out of the church. But during the periods where I was active I considered going on a mission. But I came to the conclusion that I don’t really believe in this religion lark. I’m not sure what I believe in.

You moved to Liverpool in the late seventies, and were in a pre-fame version of Dead Or Alive with Pete Burns. What was he like back then?

He was really caustic, he was cruel at times, but he was funny. He’d walk through the streets and the scallies would slag him off, but he’d give as good as he got. The only person Pete ran scared of was Courtney Love, who was living in Liverpool – this young, loud, brash American girl. I liked Pete, and I think he had some affection for me.

You went from being a teetotal Mormon to embracing drugs and sex pretty quickly. What changed? I think it was just a reaction to my upbringing. But taking drugs was never a crutch or a substitute for something else. It was, okay, we’re going to have fun. It was a daily event in the Sisters and The Mission. But I was never addicted. I think I was always aware of my limits.

What’s the most ridiculous thing you did while on drugs?

Why weren’t you in the thick of it?

I guess most of my appetites were already being sated on a daily basis. And it seemed like a fun thing to do.

You were in the Sisters Of Mercy for two years in the mid-eighties, and were a big part of their debut album, First And Last And Always. What was Andrew Eldritch really like?

He was a big figure in my life, even though I’ve not seen him for years. But he wasn’t a particularly warm person, whereas I’m quite sociable once I get into the swing of it.

Did the ‘Andrew Eldritch’ mask ever drop? Did you get to know the real Andrew Taylor?

No. He was already Eldritch by the time I met him. Maybe I saw fleeting glimpses, a momentary sensitivity that was out of character. And the speaking voice was very different to the singing voice. It reminded me of Rigsby from Rising Damp.

The early years of goth have been mythologised. What was it really like?

It was absolutely exciting, but none of us had any idea that there was a movement starting. Nobody at the time thought: “Yeah, we’re gonna look back in thirty years time and think: ‘What a great moment.’” And we didn’t christen it goth, it was you lot, the press.

You formed The Mission after you left the Sisters. You always seemed like you had bigger ambitions than just being a goth band. You wanted to be Led Zeppelin?

I think that’s accurate. I was always terribly ambitious. I wanted to be a pop star. And I found myself becoming one.

Did it go to your head?

Of course. I believed the shit people were writing about us, good and bad. Once you get through that, though, you’re alright.

I did! Lemmy introduced me to him at a Killing Joke gig at the Hammersmith Palais a few years earlier. I said: “Would you produce our next record?” This would have been the second Sisters Of Mercy album. He just went: [slurring] “Fack orf!”

The Mission have split and re-formed several times over the years. Why keep returning to it?

Because it’s still fun. It’s different to the way it was thirty years ago, it’s mellower now. I wish I still had the physical capability to spend a night on the tiles and not feel sick for the next four days, but I don’t. I actually take a bit of pride in my performance now. And I’ve actually learned to sing.

Salad Daze by Wayne Hussey is out now, published by Omnibus Press. Tickets for The Mission's The United European Party Tour are now on sale.