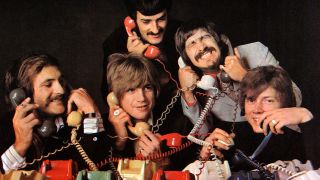 From R’n’B roots to mainstream icons, The Moody Blues have had a varied career over the past five decades. Such has been their diversity that they have been touted as pop, symphonic hard and just straight-up hard rock, all done with their own inimitable taste and style. These are the 10 songs which best define their stellar success.

The band’s only chart topping single in the UK was from their more blues-oriented era. Denny Laine did the lead vocals, and this song became so closely associated with him that the band haven’t done it live for many years. But you can also hear the stirrings of their symphonic rock leanings, and it still sparkles.

Autobiographical in nature, it deals with the turbulent times the band were facing, as they regrouped from the Octave album after a five year hiatus. Lyrically, it defines an era when nobody in the Moodies was sure what would happen. But musically it’s confident and purposeful. The combination of strength and vulnerability is enticing.

This has long been a huge live favourite; in fact, the song’s usually reserved for the final encore. It’s an uptempo, vibrant rock’n’roll song. But lyrically it delivers a scathing attack on people’s desperation to be part of the rat race, all done with a sly whack of humour.

Justin Hayward has described this as one of his favourite Moody Blues songs. It marked a move towards a more electronic sound, which was highly contemporary and fitted into The Other Side Of Life album style. But it still has a smooth pop rock vision that complements a simple, wistful melody with nostalgic lyrics. A masterful representation of the era.

A high energy, driving song which begins with a strolling drum intro from Graeme Edge. Lyrically, it’s about how music can unite people around the world. But don’t expect musicians to have the answers to any problems! This was the band’s final single before taking a half-decade break.

This was hilariously called Fat Arthur for a little while, thanks to a misunderstanding between composer Hayward and studio engineer Greg Jackman. But it is far from a humorous song. Brilliantly drawing on the band’s late 60s symphonic rock roots, this offers hope for the future, as long as people take control of their lives and events.

Based on a composition from 17th Century German composer Johann Pachelbel, it begins with a haunting combination of flute and harmonium, with Messrs. Lodge and Hayward providing vocals. The performance then opens up into a full blown band exposition about how life seems a habit of throwing up surprises. A majestic Moodies excursion.

Written by Hayward about his feelings concerning the Vietnam war, which was raging at the time the band were recording the album A Question Of Balance. In fact, Question is a combination of two songs, which explains why there are two distinct pacings. But piecing these together offers a powerful message that still retains an ability to emotionally move you.

This was actually the band’s last hit single. It was written by Hayward, who has often referred to it as one of his favourite Moodies songs. In many respects, it’s a sequel to Your Wildest Dreams, as the lyrical protagonist searches for his lost love. Catchy yet also calmly intricate, it’s been an enduringly popular song among fans.

Not only is this the most acclaimed song of the Moody Blues’ career, but is one of the best singles from the late 60s. It launched the band as we know them today, and effectively defined the whole symphonic rock genre. A work of genius, it has long been copied by others, but never equalled.

Top Of The Progs: The Moody Blues - The Voice

Archive - The Moody Blues: Revolution In The Head