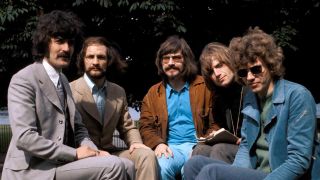 The Moody Blues sold tens of millions of albums, released a Christmas song called Don't Need A Reindeer, and discovered The Lost Chord in 1968. But there's got to be more to the band than that, surely? Here's ten reasons to celebrate The Blues.

They used to be named after a brewery

An early name for the band was ’M&B Five’, named in tribute to the Mitchells & Butlers brewery in Birmingham — the band hoped the company would give them a sponsorship deal, although it’s unclear whether payment would be made in money or in beer. Today, Mitchells & Butlers runs several successful restaurant brands, including the Toby Carvery Sandwich Express chain.

Denny Laine was once in a band called Balls

They were a short-lived Midlands supergroup who released just one single, the anti-war song Fight For My Country, which was came out after they’d spilt up. Rumours persist of a lost demo recording featuring John Lennon and Brian Jones.

Their version of Nights In White Satin wasn’t the first

While Justin Hayward may have written the song, a French outfit called Les Jelly Rolls got there first and released it as a single in Italy.

Situated in the ‘British Invasion’ section of the Hard Rock Park in Myrtle Beach, South Carolina, ‘Nights in White Satin: The Trip’ was a theme park ride featuring a glow in the dark knight, a holographic skull and a rotating tunnel.

The Strawbs’ Lay Down featured in the second series, but couldn’t be used for the DVD release. In stepped the Moodys, and The Story In Your Eyes was used to plug the gap.

A half-forgotten sci-fi series with a theme, It Won’t Be Easy, written and sung by Justin Hayward and produced by Tony Visconti. One critic later called it “the worst single theme tune of any TV show ever”. This is the kind of thing great cult TV is built on

After leaving the band in 1978, Pinder player became a consultant for Atari, working on music synthesis and demoing equipment like the company’s ‘Notator’ midi music sequencer at trade fairs.

Their influence on hip hop

Moody Blues tracks have been sampled by some of the coolest names in hip hop: KRS-One, Madlib, Nas, cLOUDDEAD and J Dilla have all borrowed from the Blues.

There’s nothing more prog than the Mellotron, and Mike Pinder was amongst the first to use one, having previously worked at Streetly Electronics, the manufacturer. This expertise came in use frequently, as the Mellotron was extremely unreliable.

They ran their own record shop

Threshold Records was launched as a label initially (Glen Hughes’s Trapeze would be amongst the first to sign up) then as a shop, quickly expanding to include branches in Swindon, Andover and Chichester.

Customers at the main Cobham branch – also home to the band’s fan club – included Who drummer Kenney Jones, golfer Colin Montgomery, and disgraced PR guru Max Clifford. It finally closed its doors in February 2011, to be replaced by a kitchen outfitter called Adaptations.