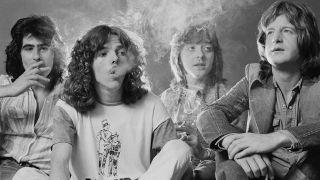 Often unfairly dismissed as mere Beatles imitators, a reputation not helped by their association with Paul McCartney, George Harrison and the Apple label, Badfinger created some of the most sublime melodies of the early ‘70s. The band’s legacy may be mired in tragedy, with songwriters Pete Ham and Tom Evans both taking their own lives (in 1975 and ’83 respectively), but they left behind some wonderful work.

A conflicted and tender kiss-off to the band’s old paymasters, issued as Apple wound down and Badfinger had accepted a more substantial offer from Warner Bros. Pete Ham offers a poignant farewell with the lines: ‘Now the time has come to walk alone / We were the children, now we’ve overgrown.’

The highlight of an otherwise unremarkable Warner Bros. debut, this crestfallen ballad (produced by Chris Thomas) has all the hallmarks of classic Badfinger: wistful piano, sensitive guitar shading and Pete Ham at his plangent best. Inexplicably, it was overlooked as a single in favour of the inferior Love Is Easy and I Miss You.

Pete Ham’s piano-led meditation is a prime example of his consummate artistry, replete with purring harmonies and a comely melody. The song’s gestation was less agreeable though, with Apple’s A&R boss Phil Spector initially nixing its projected single release and producer Geoff Emerick being usurped by George Harrison, who helped shape a new version.

This stately pop-rock beauty, from Badfinger’s most underrated album, remains one of Pete Ham’s very finest pieces, from its elegant intro to its extended fadeout. Essentially a warning about the potholes of life, it’s also an affirmative love song that offers parental guidance, addressed to ‘little Dennis with the rascal in your eyes’.

Once described by Paul McCartney as “the killer song of all time”, Without You has been covered by close to 200 artists, most successfully by Harry Nilsson in 1971 and, 23 years later, Mariah Carey. The original, co-written by Pete Ham and Tom Evans, is less saccharine and more understated, delivered with a genuine sense of anguish.

A contractual feud between management and record label meant that Wish You Were Here was withdrawn just weeks after its release, thereby consigning Badfinger’s last great album to oblivion. This tough-rocking boogie spliced together Ham’s Meanwhile Back At The Ranch with Joey Molland’s Should I Smoke? to thrillingly epic effect.

A chunky guitar motif and rich melody form the backbone of one of Badfinger’s most anthemic tunes, a declaration of loyalty and affection with a Beatlesy middle eight and the kind of hook that became synonymous with the soulful power pop of Big Star and The Raspberries. Joey Molland’s guitar solo is memorable too.

Paul McCartney demo’d this infectious nugget during the sessions for Abbey Road in July 1969. When it came to supplying songs for the soundtrack of The Magic Christian (starring Peter Sellers and Ringo Starr), the Beatle took the producer’s chair and donated it to Badfinger, who added lustrous three-part harmonies.

Initially the second single lifted from the Todd Rundgren-produced Straight Up, Baby Blue is Pete Ham’s passionate ode to Dixie Armstrong, whom he became involved with during Badfinger’s final tour of the US. The song enjoyed a steep popularity spike after its inclusion in the climactic scene of US TV series, Breaking Bad.

With its unassailable melody, plaintive vocals and lovestruck sentiment, this is Pete Ham at his aching best. Producer George Harrison elevates things further with a wonderful slide solo, while the mighty Leon Russell adds piano. A top ten hit at both ends of the Atlantic, Day After Day still feels like a ravishing masterpiece.

The Story Behind The Song: Baby Blue By Badfinger