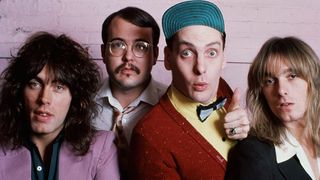 Few bands have been as adept at creating expert-quality pop rock as Cheap Trick. For over four decades they’ve fashioned songs which bear the hallmark of greatness. Their style is instantly recognisable, and links The Beatles and The Move to the modern era. These are their finest moments.

Here’s proof that not all of this band’s finest moments lie in the distant past. This is from the Rockford album, and has all the trademarks of a classic Trick track – persistent tunefulness, cunning guitar swathes and Robin Zander’s soaring vocals. It’s more edgy than retro, and has a welcoming freshness.

From the Dream Police album, this builds from a low key opening into an almost sombre, heavy song. Rick Nielsen’s guitar approach is sparse, while Zander’s vocals have a sinister, guttural power. This song shows that Cheap Trick could be effectively nasty, with Bun E. Carlos’ drum sound unnervingly monochrome.

Perhaps the band’s first masterpiece, from their self-titled, debut album. It immediately established them as doyens of power pop, with the deceptively simple musicianship bringing out the full flavour of the track. Full of double-entendre and cynicism, it’s got the thumping rhythms of early 70s British glam, yet given an American tweak.

From Standing On The Edge, this is a sedate song, the musicianship flowing with a mid-paced power. It’s here you appreciate the way Zander and Nielsen work as a formidable combination, with the latter weaving his guitar parts in and out of the former’s vocals. It shows their genuine understanding of each other’s musicality.

From One On One, this was produced by Roy Thomas Baker. It has Cheap Trick heading in a more obviously commercial 80s direction compared with what they’d produced before, but they never abandon the eccentric style with which they made their reputation. There’s a fine, well-produced balance between old and new sensibilities.

The only Cheap Trick single to go to number one in America, the band were initially reluctant to record this ballad, written by Bob Mitchell and Nick Graham. But it’s ended up being one of their most recognisable songs. From Lap Of Luxury, it was originally offered to Elkie Brooks who, luckily for Trick, rejected it.

This Fats Domino song was given a Cheap sheen on the 1979 live album Cheap Trick At Budokan. There’s a rollicking momentum here, with Zander’s almost gruff vocals augmented by some expressive guitar tones from Nielsen. Although it’s a cover, the band did it so well they effectively made it their own.

Tongue in cheek, flippant, this is a breezy high point of late 70s power pop. The title track of one of the band’s most renowned albums, it has the flow and impact of Cheap Trick in their prime. They never forget the importance of keeping things simple, but doing it with class.

The first Cheap Trick single to break through in America. From Heaven Tonight, it’s the tale of a kid dealing with rock’n’ roll parents – a twist on the generation gap. With this song, the band found their mark and rhythm, mixing creative musicianship with a teen-friendly melody, all done with an effective eccentricity.

The most recognisable of all Cheap Trick songs, this originally appeared on In Color, but came into its own with the version on …At Budokan. Conceived by Nielsen as an overblown pop parody, the irony is that it’s become a true pop rock classic. Everything we love about this band is here.

The 10 best Cheap Trick songs, according to Biters' Tuk Smith