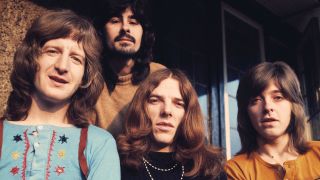 A man collapses to the floor, mortally wounded after a violent shootout. While he lies motionless on his back, eyes open, the cops burst in and discover his body. The camera slowly pans back towards the ceiling... After five years and 62 episodes, it’s finally the end for Walter White, the anti-hero of Breaking Bad.

Broadcast this September, it was one of the most memorable finales in US TV history, pulling in more than 10 million viewers. The soundtrack to White’s demise proved to be uncommonly popular too. Badfinger’s Baby Blue, initially a hit in 1972, had been chosen by series creator Vince Gilligan to mirror his protagonist’s love of blue methamphetamine.

“He’s with that meth lab that he designed, his baby so to speak,” Gilligan explained, “The lyrics back that up. And I think he is at peace with himself.”

In the immediate wake of the broadcast, Baby Blue sold more than 5,000 downloads, triggered a 9,000% spike in Spotify streams and leapt to No. 16 on the iTunes chart. A TV show about a drug-dealing 50-something school teacher was suddenly breaking Badfinger all over again.

Watching at home in Minnesota that night was Liverpool-born guitarist Joey Molland, the sole surviving member of the band’s classic line-up.

“I only found out that day that they were going to use the song on Breaking Bad,” he says. “So while I was surprised, I wasn’t stunned. The mix was different, as was the way they edited the whole thing, but I thought it was great.”

Baby Blue was the last major hit of Badfinger’s career. As with prior successes like _Come And Get It and Day After Day_, the song was a yearning rock ballad that provided a bridge between The Beatles and Big Star. Songwriter Pete Ham’s uncanny gift for a pop melody was fully to the fore, as were Badfinger’s trademark harmonies, which heightened the inherent melodrama of the subject matter.

Ham had written it for southern singer Dixie Armstrong, whom he’d met during the band’s US tour of 1971. “She came to one of the shows, they got talking and Pete really liked her,” Molland recalls. “I don’t know whether they fell in love straight away, but he invited her on the road with us and she came along. She came back to England, too. But we were working in the studio a lot and doing gigs, and I don’t think she was really into that side of it. And then Pete wouldn’t call her when he was away, though I don’t know why. We were just a bunch of guys, and didn’t sit around talking about romantic relationships.”

The sentiment of Baby Blue is rueful. Ham seems trapped by the life of a travelling musician unable, or unwilling, to sustain his newfound love. ‘Guess I got what I deserved/Kept you waiting there too long, my love,’ he sings in the kind of plangent tones echoed in Without You, the monster hit for Harry Nilsson that Ham co-wrote with bandmate Tom Evans.

Molland remembers recording the song on the same day that Ham brought it in. “Pete had written it on acoustic guitar and had some ideas for the linking licks. So I took over that job, we all ran through it a few times, and recorded it. Then we did a couple of overdubs to fatten it up.”

In the producer’s chair was Todd Rundgren. He’d taken over the reins of parent album Straight Up from George Harrison, who himself had replaced Geoff Emerick behind the desk but was now engaged in his Concert For Bangladesh project. Rundgren was intent on returning to Emerick’s original idea of capturing Badfinger live in the room.

“He was into recording the band rather than doing multiple overdubs and going for the big, Phil Spector kind of production that George had been after,” explains Molland. “But he was very rude to us, to tell you the truth, so it wasn’t a lot of fun. He told us he didn’t think we could play very well. But I have to admit that he did do a great job, because Straight Up was our biggest record.”

While Rundgren set about redoing some of the tracks done with Emerick and Harrison, Baby Blue was the first new Badfinger tune he attempted. A key feature was his decision to feed a guitar through a Leslie speaker. He later described the effect it created as a “swirly guitar sound that was somewhat signature on the song”.

Nevertheless, the tortured gestation of Straight Up also fed into the release of the single. The story goes that Al Steckler, Apple’s US boss, was unsatisfied with Rundgren’s mix and asked Eddie Kramer to do a fuller one with a stronger guitar intro. “Al Steckler was an A&R guy in New York,” Molland says. “He was a sweetheart. But we didn’t know about the new mix until after it happened. Many years later, in fact.” Despite being assigned a release number, Baby Blue wasn’t even issued as a single in the UK. Though it rose to No. 14 in the US, Badfinger’s time at Apple was drawing to a close. The label had first picked them up in the late 60s, when Paul McCartney wrote and produced their breakthrough 45, Come And Get It. The band’s three albums up to and including Straight Up sold steadily, but their final LP for Apple, 1974’s Ass, was blighted by legal problems. Less than a year into an ill-advised new deal with Warner Bros, and with financial irregularities surrounding the group and management, Pete Ham hanged himself. He was 27. Eight years later, in ’83, Tom Evans also committed suicide.

Today, Molland still tours under the Badfinger name. But resurgence of interest sparked by Breaking Bad has left the guitarist with a dilemma.

“There are more gigs coming in, so it’s like a throwback to the old days,” he says. “But on a practical level, nothing’s really changed. I don’t know whether to be really excited because I’ll be working like a dog, or whether I should be going, ‘Wait a minute, man. Relax and take it easy!’”

Baby Blue producer Todd Rundgren recently likened Badfinger to “an ersatz Beatles”, positing the idea that they were “almost filling a void that was opened up when The Beatles stopped recording together”.

Guitarist Joey Molland concedes that, while they were grateful for the initial leg-up from the Apple label, the comparisons soon wore thin.

“We got a lot of that in the early days,” he says, “especially after Paul wrote Come And Get It. People started expecting The Beatles to show up at our gigs. They’d say stuff to us like: ‘Is George playing in the band tonight?’ It was funny at first, but it got really tiresome.”