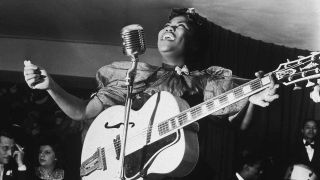 Maybe it was Bill Haley. Perhaps it was Chuck Berry. Some say it was Ike Turner. We might not be able to identify the true inventor of rock’n’roll, but when the familiar musical history gets trotted out, names such as Bessie Smith, Cleo Gibson, Ida Cox, Sister Rosetta Tharpe, Memphis Minnie, the Harlem Playgirls, Sippie Wallace, Big Mama Thornton, Ruth Brown and Wanda Jackson are usually absent from the conversation, or at best relegated to passing mentions.

Bill DeMain puts that right in Classic Rock 246, looking at the women who have at least a partial claim on the title.

Below, we’ve excerpted his chapter on the great Sister Rosetta Tharpe.

Muddy Waters was only partially right when he sang, ‘The blues had a baby and named it rock’n’roll,’ for it surely wasn’t a virgin birth. The other parent was black southern gospel music. The whoops, hollers and vocal flourishes that were connected to the unbridled union with the holy spirit made their way into rock’n’roll, where they expressed a more earthbound union.

And no one embodied that sacredprofane hand-off from church to juke joint better than Sister Rosetta Tharpe. At the age of four, billed as ‘Little Rosetta Nubin, the pint-sized singing and guitar playing miracle’, she tore through the southern touring circuit known as the Gospel Highway. By her early twenties she was thrilling audiences at Carnegie Hall and the Cotton Club. When she got married in 1951, 25,000 people paid to watch her wedding.

On stage, in her Sunday best and wielding a Gibson SG, she peeled off wild, primal guitar licks, and raised the roof with her soul-deep voice. Little Richard, Chuck Berry and Johnny Cash all acknowledged her as a major influence.

She was born in Cotton Plant, Arkansas, in 1915. Her father’s identity is unknown; her mother was a musician and evangelist preacher in the Church of God in Christ. It was one of the few churches that allowed women to preach, and also encouraged musical expression beyond the hymn book. It was an ideal environment for a child prodigy, and Rosetta’s course was set early.

After becoming a star in her mum’s church in Chicago, she moved to New York, where the legendary talent scout John Hammond introduced her to big city audiences. Signed to Decca Records, and singing with Lucky Millinder’s orchestra, Rosetta shocked her gospel fans by recording saucy material like Four Or Five Times and I Want A Tall Skinny Papa. Her 1945 record of Strange Things Are Happening is one of a handful of candidates for the first-ever rock’n’roll record.

But it was really on stage where Rosetta most embodied the rock’n’roll spirit. There isn’t much existing footage of her, but one clip, from 1964, shot on a train station platform in Manchester, England, is revelatory. The confidence, the sexuality… it’s pure rock’n’roll. But most of all there’s the voice. It’s a voice of the human spirit, a voice that, no matter where or who you are, will reach across decades to rivet you in place.

You can read the full feature on rock’n’roll’s founding mothers — also including Big Mama Thornton, Memphis Minnie, Wanda Jackson and more — in the latest issue of Classic Rock. Buy it online or become a TeamRock+ member to read it right now.

Paying tribute to the founding mothers of rock'n'roll