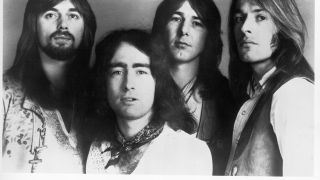 It was the end of 1969 and Paul Rodgers was a long way from home. While chart success still eluded the Free vocalist and his band at this point, their reputation on the UK blues circuit had been enough to earn a string of dates on the American West Coast supporting Blind Faith. One particular afternoon the band had pitched up at a sun-dappled hippie commune outside San Francisco where Rodgers, still in his teens and more familiar with the industrial smog of his native Middlesbrough, felt the muse strike.

“I was staying at this camp in California when I started to come up with the lyrics and music to Feel Like Makin’ Love,” the singer recalls. “It was an amazing place to be. I was about 19 and touring the US with Free, so the song actually stayed on the back burner all the way until the start of Bad Company in 1973. And I did feel like making love at the time. I think I probably was in love – that happened a lot.”

While all around him tripped on hallucinogens, Rodgers sketched out the song with a clear head.

“In those days there were a lot of things flying around,” he recalls. “There was something called mescaline, which the Native Americans took, and there was a lot of that around, but that’s just a background to the time. I definitely wouldn’t have taken it for songwriting, though it’s fair to say that we smoked a little weed.”

Rodgers has never revealed the subject of the song’s lyric – “It’s been a long time and I don’t want to get into trouble” – but admits he wanted an everyman feel that was open to interpretation. “I think that opening line is interesting in its simplicity,” he says. “‘Baby, when I think about you, I think about love’ says a lot in a few words, and that’s what I always aim for. It’s easy to write a song, but it’s hard to write something that’s poignant; that makes the point quickly and means a lot to a lot of people. I’ve always written tender lyrics as well as tough rock songs,” he points out.

“I’ve always believed that most human beings go through the whole gamut of emotions from one day to the next – or even in the same hour. That song didn’t come from the head, somehow, it came from the heart.”

The band were taken under the wing of Led Zeppelin manager Peter Grant, and their self-titled debut album hit No.3 in the UK and No.1 in the US in the summer of 1974. Meanwhile, the song of which Rodgers had been so proud waited in the wings.

It wasn’t until September 1974, and the recording of Bad Company’s second album, Straight Shooter, on Ronnie Lane’s mobile studio at Clearwell Castle in Gloucestershire, that Rodgers put Feel Like Makin’ Love forward for consideration.

“I played it to Mick,” Rodgers says, “and I knew it still needed something. So he threw in that big chord in the chorus [the muted ‘duh-duh’ that marks the shift from country ballad to chest-beating rocker], and I said: ‘Yeah! That’s it’. It’s an example of how you can have an idea floating around that you haven’t finished, then you’re with the right musician at the right time and it just takes off.”

The band set to work. “We were writing furiously,” Rodgers recalls, “and getting on famously. Feel Like Makin’ Love was just one of a batch of songs that we put down. The band loved it straight away; it was one of those natural sessions where everybody fell into it and felt the groove. We wanted to keep the vibe from the first album, keep it as natural as possible. We liked the idea of being in this funky castle and this funky situation instead of an actual studio.”

The approach worked, and the band nailed the song’s production at a similar pace.

“The thing that was nice about [the finished version],” Rodgers explains, “is that it goes from this very tender verse to these big, heavy chords and then comes back again. It gets raucous, but it’s a kinda controlled raucousness. The simplicity of it was the magic.”

The Straight Shooter album campaign kicked off in April 1975 with the release of Good Lovin’ Gone Bad, but there’s little doubt that it was Feel Like Makin’ Love, released months later, that helped the album to sell three million. Rodgers’s intuition had been accurate; the song spoke to enough people to help it reach No.10 in the US and No.20 in the UK, and win a Grammy award.

Still performed to a rapturous reception on Rodgers’s solo tours, Feel Like Makin’ Love remains, for many, the most enduring song in Bad Company’s back catalogue. For his own part, Rodgers believes the lusty subject matter has created an even more enduring legacy. “I’ve heard it’s responsible for a whole generation being conceived,” he laughs, “although that could be an exaggeration.”