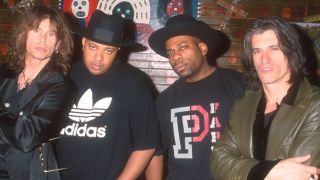 The beginning of the now-classic video for Run-DMC’s version of Walk This Way begins with the Hollis, Queens rap trio (MCs Run and DMC plus DJ Jam Master Jay) trying to drown out a band rehearsing next door – Aerosmith’s Steven Tyler and Joe Perry. Each faction cranks up the volume, until Tyler smashes a hole in the wall with his bandana-strewn mic stand – then, a ‘duet’ between both groups ensues. The video also serves as a metaphor for how separated rock and rap were at the time.

By the mid-80s, Aerosmith were a shadow of their former self. After 1985’s unfocused reunion album Done With Mirrors failed to recapture the group’s earlier glories – coupled with its members’ ongoing drug problems – it seemed like Aerosmith’s chart-dominating days were over. On the other hand, Run-DMC was a group on the rise – their first two albums [1984’s Run-DMC and 1985’s King Of Rock] helped put rap on the map and, as evidenced by both the title track of King Of Rock and Rock Box, the seeds for a rap-rock hybrid were sown.

It didn’t truly together until sessions began for Run-DMC’s third album, Raising Hell, in early 1986. when Jam Master Jay and DMC resuscitated a sample from their early days.

“Before rap records were made, we used to have to find beats to rap over, and Walk This Way was one of our favourites,” recalls DMC [real name Darryl McDaniels]. “There’s something about Walk This Way – when the DJ threw that on, the beat was so cool, the way those guitars came in. And then the DJ would cut it back to the start of the beat.”

“We were in the studio one day looping the beat and [producer] Rick Rubin walks in. He’s like, ‘Yo, do you know what that is?’. And me and Jay were like, ‘Yeah, that’s Toys In The Attic’. We didn’t know the group – we just went off with what was on the cover. He was like, ‘This is Aerosmith, Walk This Way’ – he was giving us the 411 on Aerosmith.”

When Rubin suggested Run-DMC re-do the song, DMC remembers resistance. “Me and Run were like, ‘You’re taking this rock-rap shit too far – you’re going to ruin us. That’s going to be fake, nobody in hip-hop is going to like it’. But he persuaded me and Jay to sit down and listen to the lyrics, so we put the needle on the record. When Steven Tyler opened his mouth, we got on the phone: ‘Y’all motherfuckers – we’re going to be ruined!’. We had this big argument.”

What Run-DMC didn’t know was Rubin had already asked Perry and Tyler to drop by Magic Ventures Studios in NYC.

“We went into the studio and laid down a weak version – because we didn’t want to do the record – and left. Eight hours later, we get a call to come back to the studio. We walk in and Joe Perry is playing his riff, Steven Tyler is in the booth doing the lyrics. Me and Run knew we had to step our game up. Jay was like, ‘Yo, don’t think of the record as “Steven Tyler and Joe Perry’s record”, think of those lyrics as Run-DMC lyrics’. So we went in the booth and that went so good that Steven said, ‘Yo, let me get in with y’all’.”

In the 1997 book Walk This Way: The Autobiography Of Aerosmith, the band’s then-manager, Tim Collins, admits not knowing what rap was when Rubin first suggested the session – but agreed when offered $8,000 for a day’s studio work.

Perry added, “I didn’t know what was gonna happen when I walked into the studio. I thought they’d show us ideas on how to rearrange the song, but all they had was a drum track.”

DMC recalls his first impressions of the Aero-duo. “Steven was very friendly and Joe Perry didn’t say one word. He’d nod at you, go over and play the guitar, finish his riff. ‘Are you ready to play?’. He’d shake his head yes. But Steve was just very friendly and inquisitive, like, ‘Wow, do the DJ thing Jay – show me how to DJ’. He was like a little kid – excited and enthused.”

In the Walk This Way… autobiography, Tyler reflected on the sessions. “Run and D and Jay were huddled in a corner, really intent on something. I go, ‘Joe, what are they doing?’. ‘Probably smoking crack’, he says. Later we went over to the corner. They’d been eating lunch from McDonald’s.”

As soon as Run-DMC began playing their version of Walk This Way, DMC knew they were on to something. “Everybody flipped out. Me and Run were so puzzled, because the reaction was overwhelming. We didn’t think it was going to be a big hit, but people were loving it.”

Soon after, the video was filmed, which MTV aired throughout the summer of 1986. Raising Hell was soon a smash, peaking at No.6 on the US album chart, while Walk This Way hit No.4 on the US singles chart. Aerosmith may have benefited more from the success – they soon kicked their addictions and enjoyed a hugely successful comeback.

DMC can see what the song accomplished. “People tell me it’s the greatest rap record ever made and the greatest video. VH-1 did the ‘Top 50 Videos Of All-Time’ – we were No.1. It was about bringing generations of music together, which is what music is supposed to do – evolution and unity.”