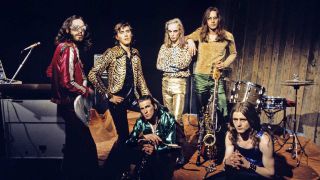 It was the song that gave Roxy Music their big breakthrough, and the summer of 1972 one of its defining chart moments. Yet it was a hit single that didn’t so much ignore the rules as simply get them arse-backwards: no chorus, a faded-in intro and a sudden ending – the opposite of ‘normal’ singles. The song’s title wasn’t even mentioned until the final, dead-stop moment, when singer Bryan Ferry suddenly blurts: ‘What’s her name? Virginia Plain!’

“This day and age when you think of singles, they have the formula perfected,” says Roxy Music guitarist Phil Manzanera. “Straight into the chorus for the beginning, play the hook, quick verse, back to chorus, repeat until fade. There was none of that with Virginia Plain.”

A guileful subversion of existing tastes? An arrogant art-rock mission statement, signalling the arrival of a new way of being?

“No, none of that,” Manzanera insists. “We just hadn’t a clue how to make a single. We’d never done one before.”

In typically back-to-front fashion, Roxy had released their debut album two months earlier, in June 1972. Ripe with songs that had no chorus or didn’t even reference their titles, and often stopped without warning, it nonetheless managed to clip the edge of the Top 10.

Recording and releasing their very first single in August 1972 was almost an afterthought. “We were told: ‘The album’s done reasonably well. You should do a single,’” says Manzanera. “We all sort of went, ‘Oh, all right…’”

When the band entered London’s Command Studios in July, they hadn’t even rehearsed the song. “We just turned up at the studio, Bryan played us these three incredibly simple chords on the piano, and we just started messing around with it there and then,” says Manzanera.

‘We’ was the classic early Roxy line-up, also featuring sax and oboe player Andy Mackay, drummer Paul Thompson and the cryptically-named Eno (no one yet knew his first name was Brian) on VCS3 synthesizer and ‘treatments’, whatever they were. The messing around proved to be extensive. As well as the stream-of-consciousness _joie de vivre of the lyrics (‘Flavours of the mountain streamline, midnight-blue casino floors/Dance the cha-cha thru till sunrise, opens up exclusive doors, oh wow!’_), there were unique sounds: Ferry’s vibrato-heavy voice; the sound of a motorbike roaring off into the distance; Eno’s Tonka-toy synths; most absurd and beautiful of all, a parping oboe.

“Was there ever a hit single with an oboe in it?” muses Manzanera. “I don’t know. But I think the feeling was there should be. No other band at the time seemed to have one.”

But then Virginia Plain had a lot of things going for it that other bands could barely dream of – not least the sense that someone, somewhere, was having a giant laugh at the rest of the world’s expense.

“There were certainly some odd things in it that you couldn’t hope for other people to get,” allows Manzanera. “For instance, the opening verse…” To wit: ‘Make me a deal, and make it straight, all signed and sealed, I’ll take it/To Robert E. Lee I’ll show it, I hope and pray he don’t blow it ’cos/We’ve been around a long time/Tryin’, just tryin’, just tryin’, to make the big time!’ Most people, understandably, assumed Ferry was referring to the Confederate general in the American Civil War. Not so, says Manzanera. The verse had virtually no symbolism at all.

“Robert E. Lee was – and still is, actually – the name of the band’s lawyer. So when Bryan sang of taking a deal to Robert E. Lee and hoping he doesn’t blow it etc, he was being very literal. As that’s exactly what happened when we were offered the deal by Island Records to sign for them.”

Even then, Roxy Music had a reputation as musical futurists ushering in a new age. But what’s striking about the recording of Virginia Plain is just how old-school it was.

Manzanera: “Apart from Brian’s synths and various tape machines, which he had pretty much assembled randomly from whatever weird toys came his way, everything else was very much done as-live in the studio. For the sound of the motorcycle we actually had to borrow someone’s bike. Then wait till the middle of the night and take it out onto Piccadilly Circus, which is where the studio was, because in those days Piccadilly Circus was fairly deserted at night. Hard to believe now, but true. Then we got someone to start the bike up and rev the engines and finally speed off while we stood there recording it with this big reel-to-reel tape-recorder.”

But if it sounds like Roxy were inured to just how great the end result was, don’t be fooled.

“Oh, we knew how good it was even as we recorded it,” says Manzanera. “We still didn’t see ourselves as a singles band even after it became a big hit and we did our first Top Of The Pops. Which is why neither Virginia Plain nor our next single, Pyjamarama, were ever included on the albums. We were a serious band. I remember standing on the stage at Top Of The Pops, all of us dressed in our glam costumes, and feeling very superior to whoever else they had on the show that week.”

They weren’t the only ones who thought themselves and their strange, kinky single superior. When David Bowie launched his Ziggy Stardust album and tour that same summer with a plush press party at the Dorchester Hotel, the only record he allowed to be played other than his own was Virginia Plain.

There’s just one question left hanging: who or what was Virginia Plain? Some far-out, beautiful fox like the ones that used to feature on all Roxy’s album covers?

“Sadly, no,” replies Manzanera. “Bryan had been an art student and done a number of paintings, one of which was a sort of Warhol-type pop-art painting of a cigarette packet, which he’d called Virginia Plain.”

So Virginia Plain was a cigarette?

Manzanera laughs. “Well, it was a cigarette packet.”

In an era when releasing singles was decidedly frowned upon – even more commercially-minded artists like Rod Stewart and Elton John allowed only one single from their albums at that point, while Led Zeppelin refused to release any singles at all – Roxy Music chose to take the route pioneered in the 1960s by The Beatles and the Rolling Stones and release singles, but simply not include them on their albums.

As a result, while Virginia Plain was included on the later US version of their eponymously-titled debut, it remained in seven-inch vinyl form up until the advent of CDs.

“Eventually we gave in, but even then it was only one single per album,” Phil Manzanera recalls. “I still rather like the idea of keeping singles and albums separate.”