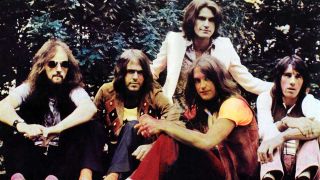 The Kinks were yesterday’s men as the 70s dawned, written off as 60s relics. Their only significant hit since 1967, Days, hardly arrested a calamitous, lift-shaft fall which hit bottom with a humiliating 1968 tour of working-men’s clubs, bizarrely undertaken as they finished their wistful LP classic The Kinks Are The Village Green Preservation Society, which bombed. Convinced their archaic label Pye only wanted Kinks singles in the age of Sgt. Pepper, Ray Davies decided he’d had it with 45s.

And yet when the first undeniable, clanging chords of Lola rang out on its release 50 years ago, it was clear The Kinks had come storming back. Not only that, but Davies’s sly tale of a transvestite affair offered a template for the imminent, androgynous glam era. For one last time in 1970, the band who had revolutionised pop six years before with You Really Got Me’s proto-punk roar had seized back their crown.

October 1969 had already seen a vital shift in fortunes, when The Kinks started their first US tour since 1965, ending a ruinous, mysterious ban. Drinking in the family’s London local that Christmas, Ray’s dad Fred was moved to offer some advice. “My dad put his pint down and said, ‘If you’re going to tour so much you need one thing – a world hit, son,” Ray recalled. “Write another world hit.”

Lola’s origins were, though, more casual. The most addictive two-syllable chorus since Hey Jude began as a nursery rhyme for Ray’s baby daughter Victoria, meant to amuse her while he was in the States.

“The first phrase was simply something for [Victoria] to sing along to – la-la, la-lah,” he told Radio 4. “I added the transvestite stuff later.”

The Kinks’ lead guitarist, Ray’s brother Dave, was in a bad way at this point, his mind quietly ripping itself apart after an acid and Angel Dust freak-out in the US. Still, he recalled conjuring yet another classic riff while strumming peacefully in Ray’s back garden, gifting his brother Lola’s musical core, to his later regret. In Ray’s memory, the whole thing was his.

Lola’s lyrics recount a provincial male virgin’s night out in “old Soho”, where a gorgeous woman’s spine-cracking dance-floor power and “dark brown” voice hint she’s not what she seems.

Ray has said this was based on real events, mentioning his dance with a beautiful “woman” when The Kinks played an all-nighter at Bridlington’s Spa Royal Hall on May 8, 1965, and Kinks manager Robert Wace’s similar hoodwinking in Paris that April.

As Ray told it to me, it all happened one night. “It was a real experience in a club,” he said. “I was asked to dance by somebody who was a fabulous looking woman. I said, ‘No thank you.’ And she went in a cab with my manager straight afterwards. It’s based on personal experience. But not every word.”

Living up to their name’s 60s connotations, The Kinks had explored gay themes before. See My Friends’ abandonment of a girl for friends “across the river” was “about homosexuality”, Ray told journalist Maureen Cleave, while Dave took makeup tips from model girlfriends and had a male affair. Drag queens the Cockettes became loyal 70s fans in the States, where Ray befriended Warhol and trannie “Superstar” Candy Darling. But Lola was more Danny La Rue, drawing on London’s cross-dressing underground.

Kinks drummer Mick Avory believes Carnaby Street PR Michael McGrath was key. “Being called The Kinks did attract these sorts of people,” he told me. “He used to have this place in Earls Court, and he used to invite me to all these drag queen acts, and transsexual pubs. They were like secret clubs. And that’s where Ray got the idea for Lola. When he was invited too, he wrote it while I was getting drunk.”

April and May 1970 saw painstaking stabs at Lola on new 16-track equipment at London’s Morgan Studios.

“It wasn’t just the song,” Ray told Radio 4. “It was the musical design. It wasn’t a power-chord song like You Really Got Me. It was a power-chord beginning. It needed a special acoustic guitar sound...sonorous, growling, with an attack to it. There’s a macho swing to it, a stride, for all its questionable content.”

He trawled Soho’s instrument shops for a Martin guitar like that of his folk-blues hero Big Bill Broonzy, combining it with a 1938 Dobro resonator guitar to get the sound he wanted. “I tracked the Martin three times, slightly out of tune, so it resonates,” Ray elaborated. “Then I got the Dobro out.”

That clanging announcement of an intro quickly slips into the acoustic strum of a modern London folk song, as our naive narrator, new in town, wonders why his glamorous new acquaintance “walk like a woman and talk like a man”. The final verse sees him back at her place, shoving Lola away and making to leave when the facts become plain, only to drop to his knees in relief. After all “girls will be boys and boys will be girls...I know what I am and I’m glad a man, and so is Lola.”

The lyric’s mention of “champagne that tastes just like Coca-Cola” (letting on that we’re in a clip-joint) famously offended the ad-phobic BBC with its reference to a commercial product when a version was recorded for Dave Lee Travis’s Radio 1 show, requiring Ray to interrupt a May US tour to splice in “cherry-cola” for this and Top Of the Tops, later doing so on the UK single (Coke stayed in the States).

This only briefly delayed Lola’s global triumph, hitting No 2 in the UK and 9 in the US. The concept album which followed, Lola Versus Powerman And The Moneyground. Part One, then dissected the process of having a hit as, fortunes restored, Ray lost interest in more.

Later that year, David Bowie wore a dress on The Man Who Sold The World’s UK sleeve. Soon, he and T. Rex (whose new glam style was itself eerily predicted on a 1969 Kinks B-side, King Kong) were making sexual ambiguity common pop currency.

Derek and the Dominos’ Layla (1971), coda and all, is surely also indebted. Once again, those serial innovators The Kinks had got there first, in a way which half a century hasn’t dated. Instead, our attitudes have caught up.

“I always liked Lola,” Mick Avory told me. “I liked the subject. It’s not like anything else. I liked it for that. We’d always take a different path.”